On a record third appearance in the Euros semis, Ronaldo also had a telling part to play in Portugal’s second as his low drive was turned home by Nani.

More records, victory and a return to the final of the Euros after the heartbreak of losing on home soil to Greece 12 years ago, left Ronaldo vindicated after a tournament in which many had questioned whether his best days were behind him at 31.

Bale, five years Ronaldo’s junior, had been the more vibrant of the two in carrying Wales to the first ever semi-final in a major tournament. He had also ended the season stronger as Madrid captured an 11th Champions League in Milan.

And it was Bale who threatened to take the game by storm in the first-half.

The flying Welshman constantly switched positions to escape the swarm of Portuguese bodies that blocked his path to goal. 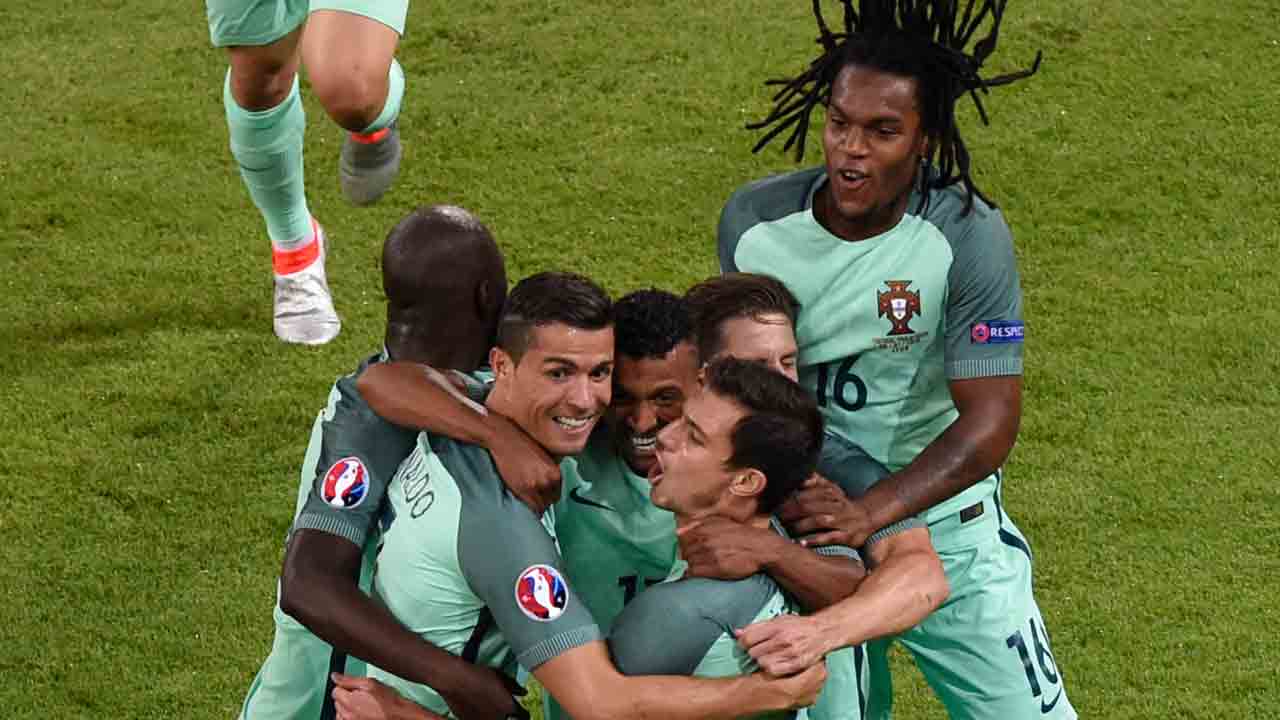 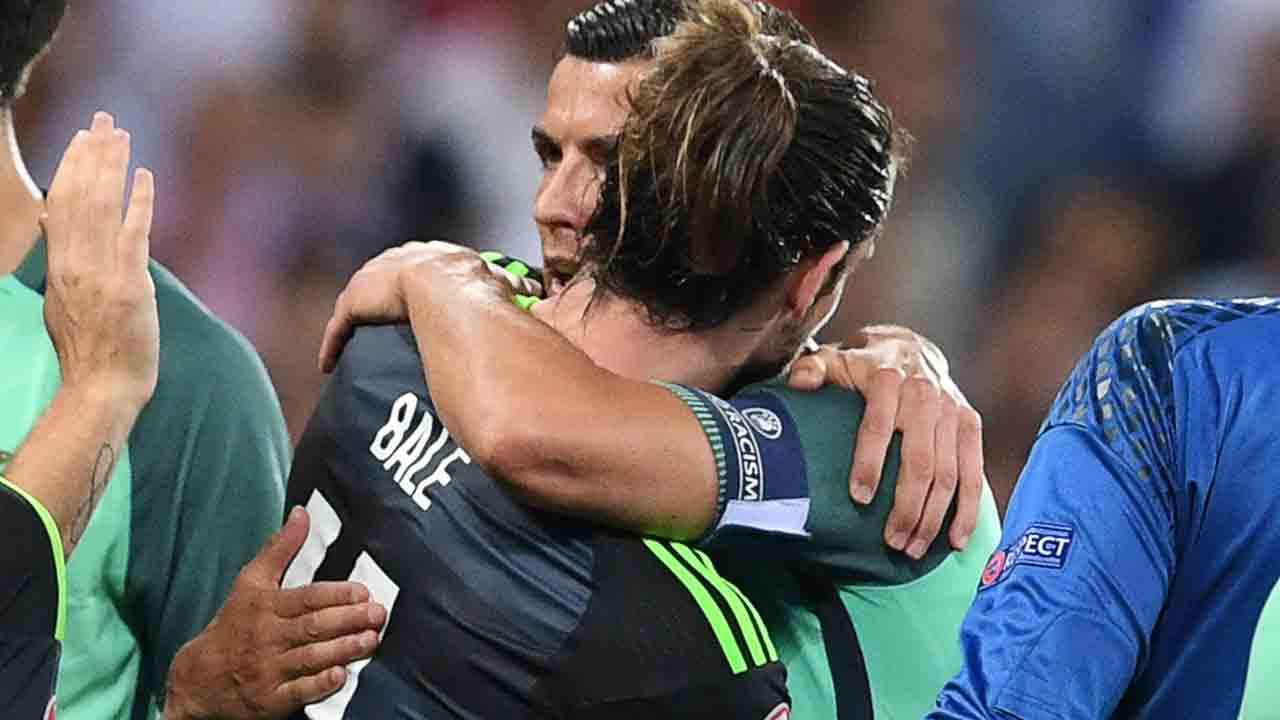 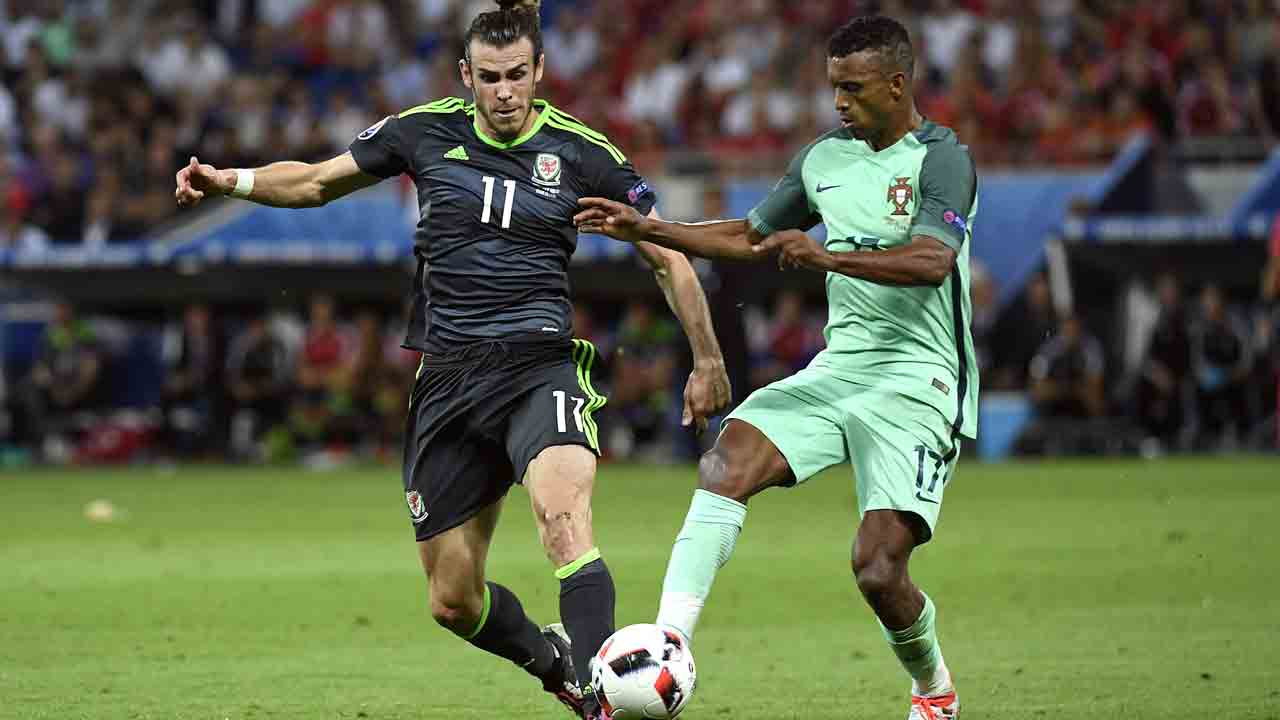 Wales' forward Gareth Bale (L) vies for the ball against Portugal's forward Nani during the Euro 2016 semi-final football match between Portugal and Wales at the Parc Olympique Lyonnais stadium in Décines-Charpieu, near Lyon, on July 6, 2016. PHILIPPE DESMAZES / AFP 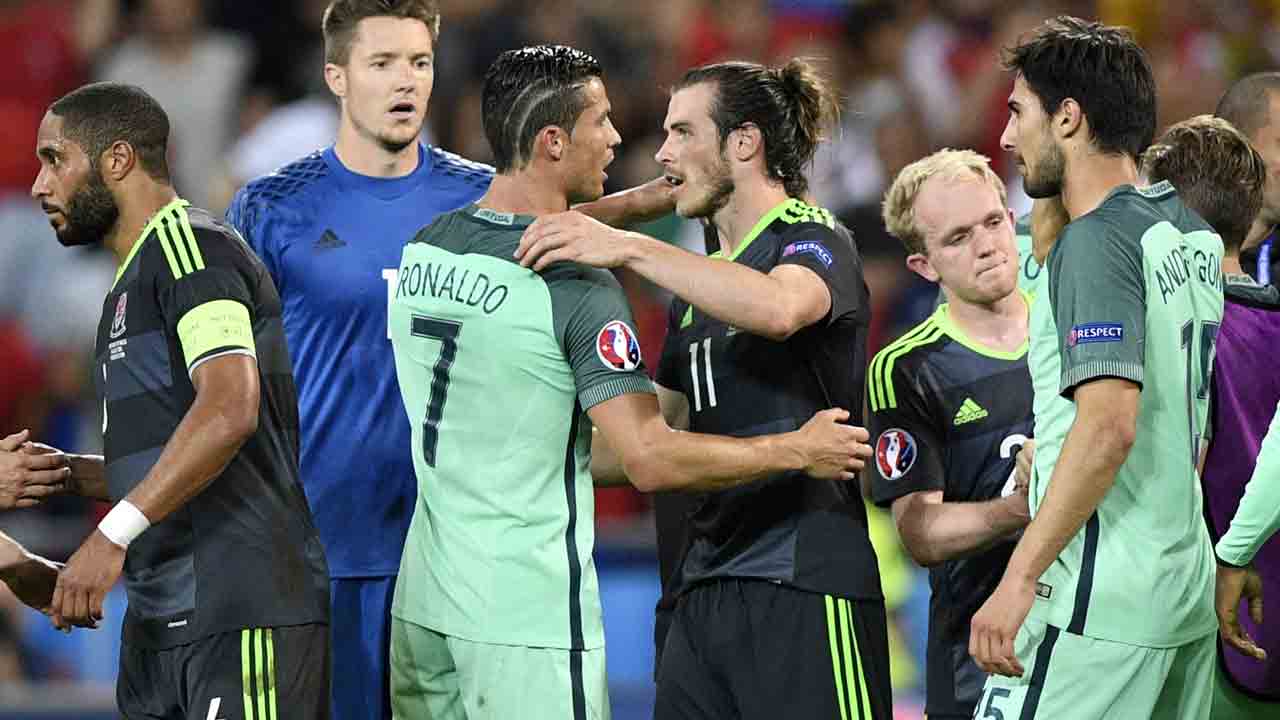 Wales' forward Gareth Bale (R) and Portugal's forward Cristiano Ronaldo embrace at the end of their match in the Euro 2016 semi-final football match between Portugal and Wales at the Parc Olympique Lyonnais stadium in Décines-Charpieu, near Lyon, on July 6, 2016. Portugal beat Wales 2-0 to go into the finals. MARTIN BUREAU / AFP 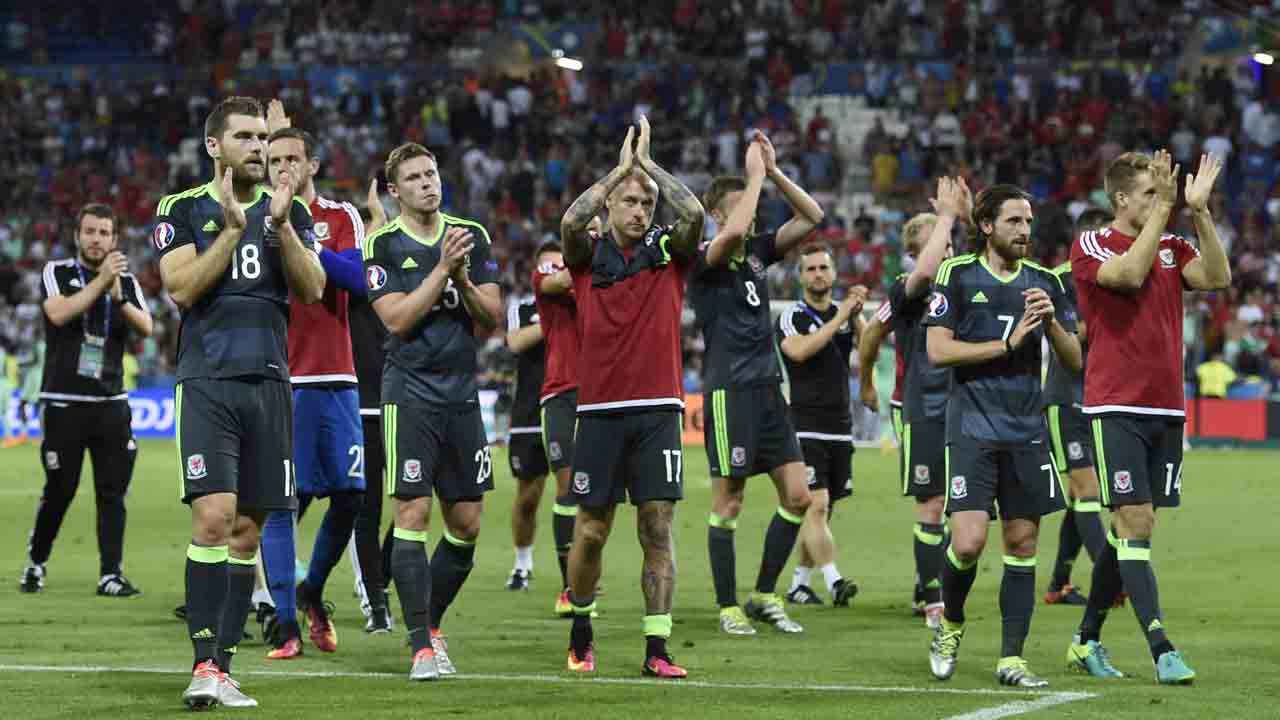 Wales players acknowledge the crowds after loosing to Portugal 2-0 in the Euro 2016 semi-final football match between Portugal and Wales at the Parc Olympique Lyonnais stadium in Décines-Charpieu, near Lyon, on July 6, 2016. MIGUEL MEDINA / AFP

A brilliantly worked corner finally freed up Bale inside the box, but, on his normally lethal left foot, his shot rose well over the bar.

Ronaldo even resorted to tracking Bale himself on his next forray down the right.

However, there was no stopping a barnstorming run from inside his own half on 22 minutes as Bale charged past two Portuguese challenges only to see his final effort disappoint again as he fired straight into the grateful arms of Rui Patricio.

Ronaldo grew increasingly frustrated with wayward passes from teammates that met with a shrug of disdain.

He did not manage a shot until 41 minutes when James Collins was the first of a possee of Welsh defenders lining up to block his effort behind before Ronaldo planted a header over just his first sight of goal.

All changed in a second period dominated by Portugal in which Ronaldo showed his power and why he is now favourite to add a fourth Ballon d’Or to his collection.

Bale scored the most headed goals of any player in Europe this season, but none could match the force with which Ronaldo rose to thump home Guerreiro’s cross to finally break Wales’s spirit.

Chris Coleman’s men had barely recovered their composure by the time Ronaldo was taking aim once more.

This time his effort was headed wide until Nani stretched to prod home his third goal of the tournament.

Ronaldo could have had more. A fiercely dipping free-kick flew inches over and he only failed to move level with France’s Antoine Griezmann as the tournament’s top scorer when he fired into the side-netting after rounding Wayne Hennessey as Wales were pulled apart on the counter-attack.

Ronaldo and Bale received yellow cards as tempers flared in the final quarter, yet there was no spoiling Ronaldo’s party that now rolls onto a Paris final on Sunday.

The two parted on friendly terms with a long post-match embrace before man-of-the-match Ronaldo went to pay tribute to Portugese fans.

Luck has undoubtedly shone on Portugal in France. They were the only side to progress through the group stages with three draws and had not won a game in 90 minutes before facing the Welsh. They squeezed past Croatia and Poland after extra-time and on penalties respectively.

Yet, Ronaldo will believe he is owed some good fortune on the international stage having lost out in the Euro 2004 final and 2006 World Cup semi-final by the slenderest of margins.

Four years ago when Ronaldo was robbed of the chance to take a penalty in a semi-final shootout loss to Spain he looked to the sky and whispered “no justice.”

He will have the chance to right that perceived wrong when Portugal play hosts France or world champions Germany in the final.

However, that challenge will only make Ronaldo’s crowning glory greater if he finally manages to deliver Portugal their first major international win.

Music
Watch: Fireboy Releases 'Playboy' Music Video
NOW
YBNL and Empire signee, Fireboy has released the music video for his trendy single Playboy.  The Hugh Hefner inspired video was directed by TG Omori.  In the video, Fireboy plays the playboy character covered in silk as he watches his bunnies.  Music stars Rema and Fave also make a surprise appearance in the song's video, joining…
Outlook
AFRICA.COM: Live from the World Economic Forum in Davos
43 mins ago
This year, Africa Day coincides with the annual meeting of the World Economic Forum in Davos Switzerland. African leaders, together with world leaders, are gathering to discuss critical issues of importance to Africa, and the world. One of the critical issues that Africa must address is how the continent tackles climate change and the role…
Politics
Mohammed Abacha wins Kano PDP governorship primary
55 mins ago
Mohammad Abacha, son of the late former head of state General Sani Abacha, emerged winner of the gubernatorial primary of the Peoples Democratic Party (PDP) in Kano. Abacha won the PDP gubernatorial candidacy with 736 votes to defeat his only rival Ja'afar Sani, who polled 710 votes. The two contestants were the only aspirants that…
Politics
PDP guber primary: Makinde, Fintiri get second term tickets
4 hours ago
The race by the major opposition Peoples Democratic Party (PDP) to win 25 states, up from the 13 it currently controls, began yesterday across the country with its shadow governorship elections...
Nigeria
2023: Obi quits PDP, eyes Labour, NNPP tickets
4 hours ago
Former governor of Anambra State and erstwhile presidential aspirant on the platform of the Peoples Democratic Party (PDP), Peter Obi, yesterday, resigned his membership of the party two days before its presidential primary.

World
British PM says 90% in ICUs have not had booster jab
29 Dec
Around 90 percent of coronavirus patients in intensive care units have not had a booster jab, British Prime Minister Boris Johnson said Wednesday, defending his decision not to tighten virus curbs in England.

World
WHO warns of Covid 'tsunami' as Omicron fuels record surges
30 Dec
A Covid "tsunami" threatens to overwhelm healthcare systems, the WHO said Wednesday, as record surges fuelled by the Omicron variant dampened New Year celebrations around the world once again.