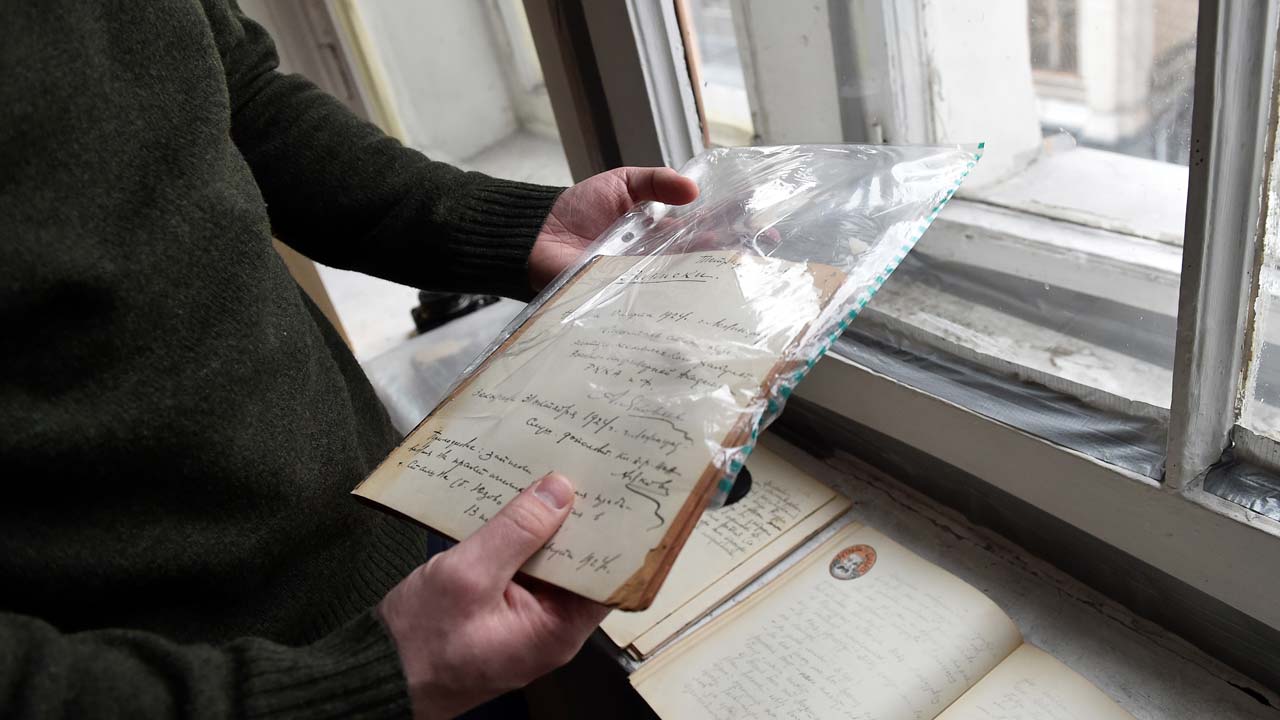 A picture taken on February 27, 2017 shows historian Mikhail Melnichenko, 33, displaying pages from a Soviet-era diary during an AFP interview in Moscow. An enthusiastic group of young Russian historians and volunteers publishes hundreds of never-before-seen Stalin-era diaries on a website called Prozhito, or Lived Through. The site was launched in 2015 and can be searched using the day, author or a keyword. It already includes more than 600 never-published journals. Natalia KOLESNIKOVA / AFP 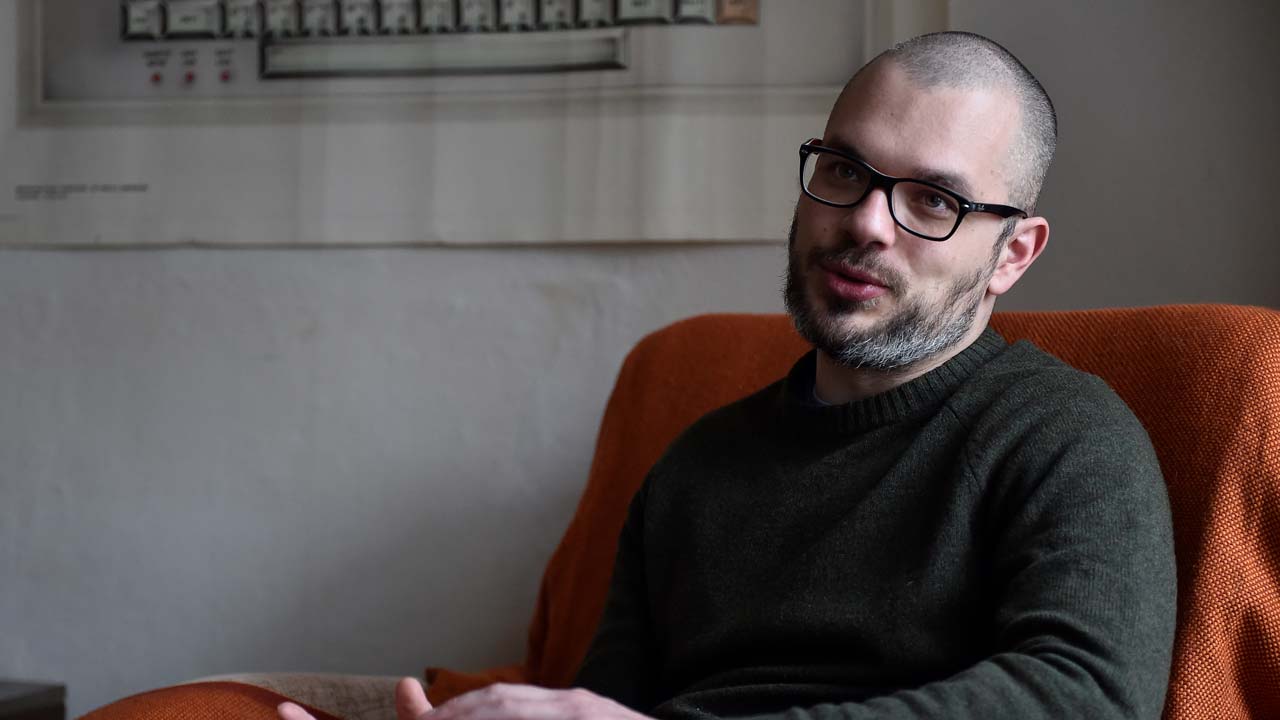 A picture taken on February 27, 2017 shows historian Mikhail Melnichenko, 33, speaking during an AFP interview in Moscow. An enthusiastic group of young Russian historians and volunteers publishes hundreds of never-before-seen Stalin-era diaries on a website called Prozhito, or Lived Through. The site was launched in 2015 and can be searched using the day, author or a keyword. It already includes more than 600 never-published journals. Natalia KOLESNIKOVA / AFP

Tatiana Panova holds a photograph of her great-grandfather as a solemn-faced student in 1923 in the Soviet Union, around 16 years before he died in a prison camp during the Stalin purges.

While Alexander Yakovlev’s death was over half a century before her birth, Panova, 25, has gained a tiny window into his thoughts and life thanks to an aged diary that her family preserved.

Now, as memories of the Stalin era fade, a project run by young Russian historians is putting his journal and hundreds more like it online in a bid to bring to life the everyday experiences of those tumultuous times.

“Any diary has value,” says 35-year-old historian Ilya Venyavkin, who is writing a book about diaries from the 1930s.

“Don’t think that if your relative wasn’t an outstanding intellectual or a singer, or didn’t live through the death of Stalin or the coronation of Nicholas II, that their diary has no significance.”

The site, called Prozhito, or Lived Through, was launched in 2015 and can be searched using the day, author or a keyword. It already includes more than 600 never-published journals.

The idea came from 33-year-old historian, Mikhail Melnichenko, after he wrote a book about Soviet political jokes using diaries as a source.

Working in his apartment and without a scanner, Melnichenko photographs diary pages on a large windowsill where the light is good. He and around 350 volunteers — a broad range of enthusiasts from different backgrounds — then transcribe the diary entries.

At a recent monthly gathering to discuss the journals, a group, many in their 20s, sat with laptops and smartphones poring over photos of browned papers. “It’s some kind of social change,” says Venyavkin. “We are suddenly interested in knowing in detail how people lived who often have no relation to us.”

– ‘It’s very mysterious’ –
The pages of the diary of Panova’s great-grandfather are brittle, with handwriting that is hard to decipher. “It’s very mysterious,” she says. “He’s… a complete stranger, a person who lived 100 years ago.”

Her great-grandmother secretly preserved the diary after Yakovlev was arrested on suspicion of a “Trotskyite” plot and sent to a labour camp in the far-eastern city of Magadan where he died.

Panova admits that initially she found his diary, written over three years in the 1920s, pretty dull.

The electrical engineer drew up weekly tables detailing the time he had spent on activities such as gymnastics. He also wrote about his studies, work on electrification, his debts and his troubled relationship with a girlfriend.

“I’d say maybe he was a bit of a bore,” Panova said. “He writes in detail every day what time he got up and went to bed.” Although she feels emotional distance, she said she hopes to learn more now and access his criminal case file.

Venyavkin says that some elements come up again and again in journals of the period: self-penned poems, fascination with cultural happenings such as films or statues and a sense that the tsarist era is ancient history.

At the same time, most were living in overcrowded accommodation and felt hungry most of the time. “It’s quite rare for someone to eat till they are full,” Venyavkin said.

Family archives are unusual in Russia due to war, evacuation and the terror that reigned during Stalin’s 1922-1953 leadership, making such diaries valuable finds, said Venyavkin.

– Dangers of diaries –
The historians talk of a broad shift from the 1920s, when people were optimistic about the future and still discussed politics, to a mood of fear during the repressive Stalin Terror of the 1930s.

“1920s-era diaries are relatively sincere because people didn’t know what would come in the 1930s,” says Melnichenko. Later, people, at times, inked out passages or cut out pages.

Diaries in the 1930s, however, took on a sinister aspect as investigators often used them as evidence of anti-Soviet opinions. Many are still in secret police archives. There are far fewer diaries from that decade, either because people did not write them or destroyed them.

“Sometimes you get the sense diaries from the 30s were written specially for a hostile reader — so if your diaries fell into the hands of an investigator, he would conclude your absolute loyalty,” says Melnichenko.

“People, who wrote diaries, knew in general that this was quite dangerous, that a diary could be read,” says Venyavkin. He describes reading the diary of a teenager whose parents were arrested in the Stalin purges.

Opinion
Taking bets on the future
27 Dec
When Adam Smith was asked whether Britain’s loss of its colonies in America in the 18th century marked the end of Britain as a power, he replied with his now famous quote - ‘There is a great deal of ruin in a nation’.

Business News
FG seeks N150b investment in ICT sector by 2025
28 Dec
To unleash Nigeria’s potential for industrialisation and sustainable economic growth, and to ensure competitiveness in a global digital economy, the government has said it will take measures to digitise...

Guardian Arts
African music industry: An outlook of trends in 2022
29 Dec
2021 has been an incredible and record-setting year for the African music industry and everybody will agree that its music has never more been more popular around the world.
Technology
Art-Tech District introduces digital museum to strengthen culture
29 Dec
The Art-Tech District, powered by Civic Innovation Lab has introduced a digitally-driven discovery museum to strengthen museum culture in Nigeria.