I will be president for all, says Biden
5 hours ago  World

Britain’s Anthony Joshua defeated veteran Ukrainian Wladimir Klitschko in a world heavyweight title fight epic in front of 90,000 people at Wembley on Saturday, taking victory on an 11th round stoppage.

Joshua added the WBA title to his IBF belt but only after being knocked to the canvas by the 41-year-old Klitschko in the sixth round.

The Ukrainian was also sent crashing to the floor in the fifth round and twice more in the pivotal 11th as the 27-year-old British fighter took his record to 19 wins in 19 fights.

“What can I say? 19-0, three and a half years in the game. As I said, I’m not perfect but I’m trying and if you don’t take part you’re going to fail,” said Joshua who was put on the canvas for the first time in his career.

“As boxing states, you leave your ego at the door and you respect your opponent. So a massive shout out to Wladimir Klitschko.”

A third defence of his IBF world heavyweight title also earned Joshua the vacant WBA belt as he became the first British heavyweight since Lennox Lewis in 2002 to hold two versions of the world title.

It was Klitschko’s first stoppage defeat since Lamon Brewster beat him in 2004 and leaves his record at 64 wins and five defeats. 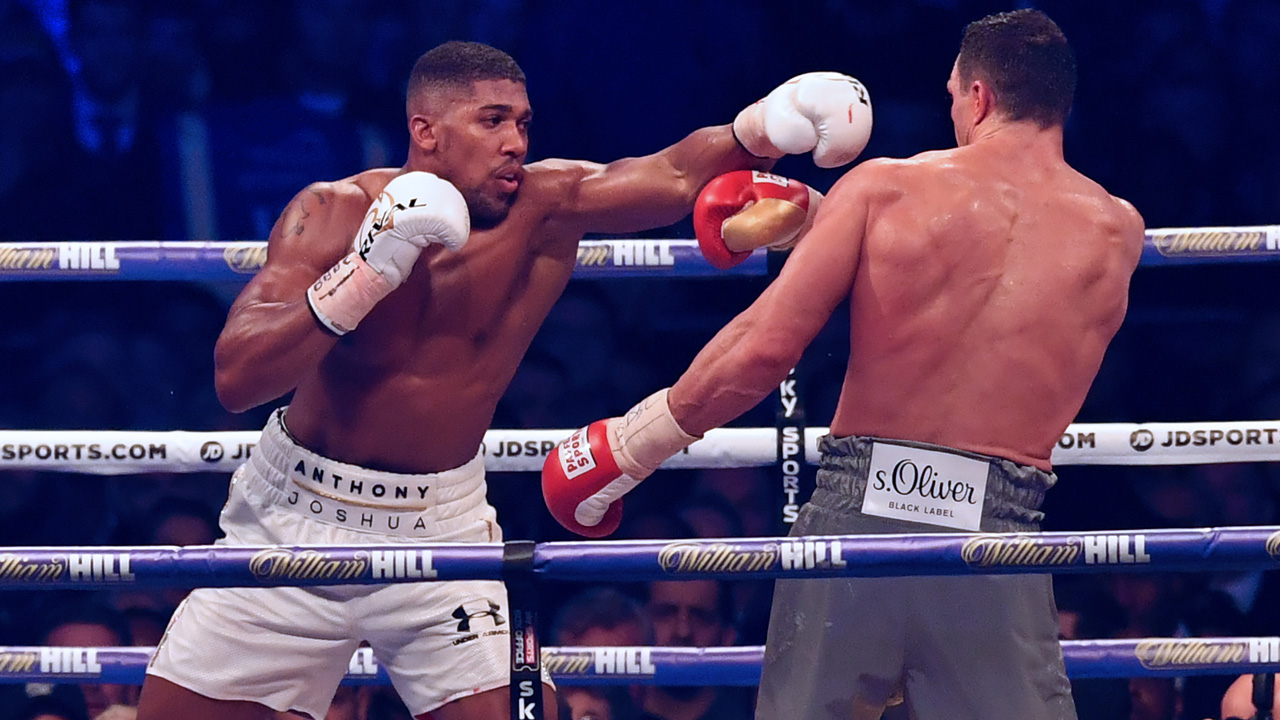 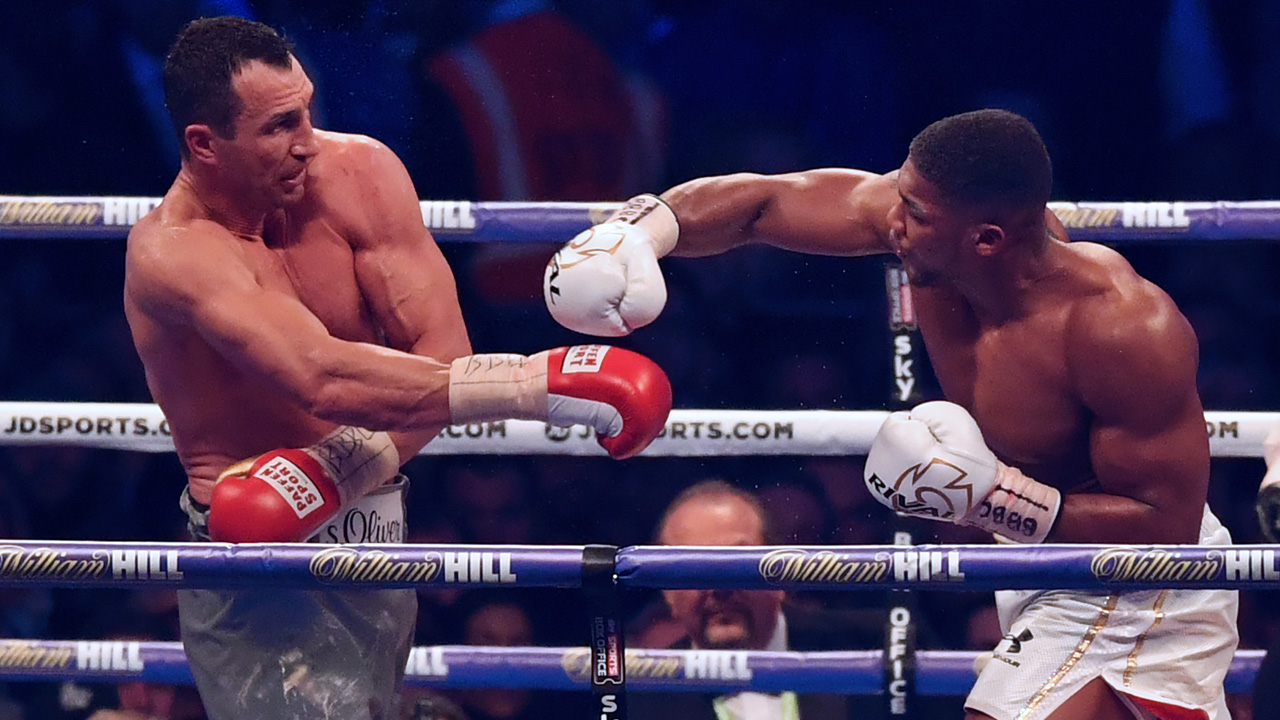 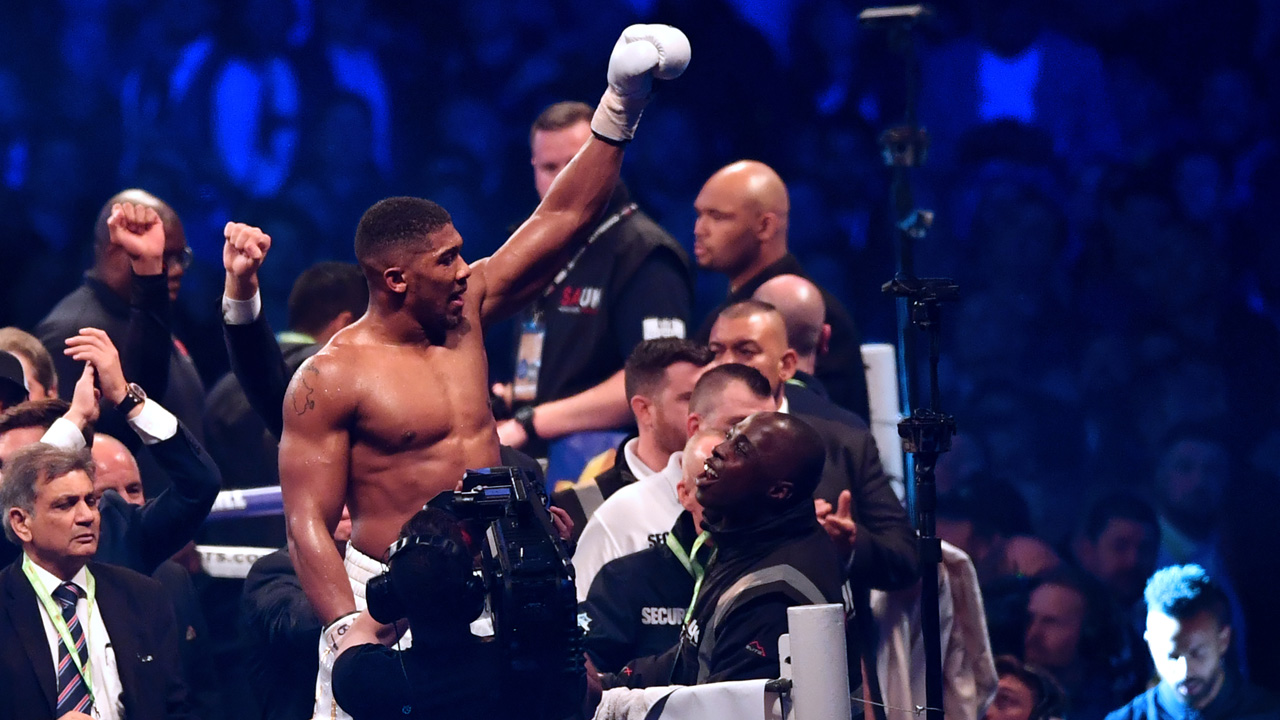 Britain's Anthony Joshua celebrates in the ring after his victory over Ukraine's Wladimir Klitschko in the eleventh round of their IBF, IBO and WBA, world Heavyweight title fight at Wembley Stadium in north west London on April 29, 2017. AFP PHOTO / Ben STANSALL

Klitschko was trying to reclaim two of the three belts he lost to Joshua’s fellow Briton Tyson Fury by an upset on points in November 2015.

The Ukrainian had not fought since then after Fury twice pulled out of rematches and entered the ring as the underdog.

It was Joshua, after 18 straight knockouts as a professional, who was the 1/2 betting favourite and he smiled as he walked to the ring in front of Britain’s largest boxing attendance since 1939.

Klitschko could not establish his jab in the first round and it was Joshua who landed more punches, with the best being a left hook in the opening minute.

The 27-year-old began the second confidently and repeatedly found Klitschko with his jab.

The Briton missed with a big overhand right at the start of the third round but then connected with a big sledgehammer of a left hand.

After a telling off in the corner, Klitschko began the fourth full of intent and landed a couple of right hands.

But it was Joshua who started quicker in a thunderous fifth round.

The Briton wobbled Klitschko with a left before landing a series of clubbing blows, including a cracking right uppercut, which sent the Ukrainian to the canvas.

Klitschko got up but was on unsteady legs and began swinging wildly.

But the fight turned again later in the fifth when Joshua suddenly became static on the ropes after punching himself out.

Klitschko seized his moment and began to land flush as he took control of the unpredictable encounter.

In the sixth, Joshua’s early confidence had evaporated and he dropped to the canvas after being stunned by a right hand to the temple.

He was up at eight and immediately had to duck a big left from Klitschko before surviving the round.

Both fancied they could stop each other and in the latter rounds looked for the big shot.

And it was Joshua who landed it in the 11th. The champion uncorked a sweet right uppercut to snap back Klitschko’s head, followed by another right to send his opponent to the canvas.

Klitschko got up from the second knockdown in the round but when Joshua started to pile on the pressure referee David Fields stepped in to stop it.