Never wear heels to a festival 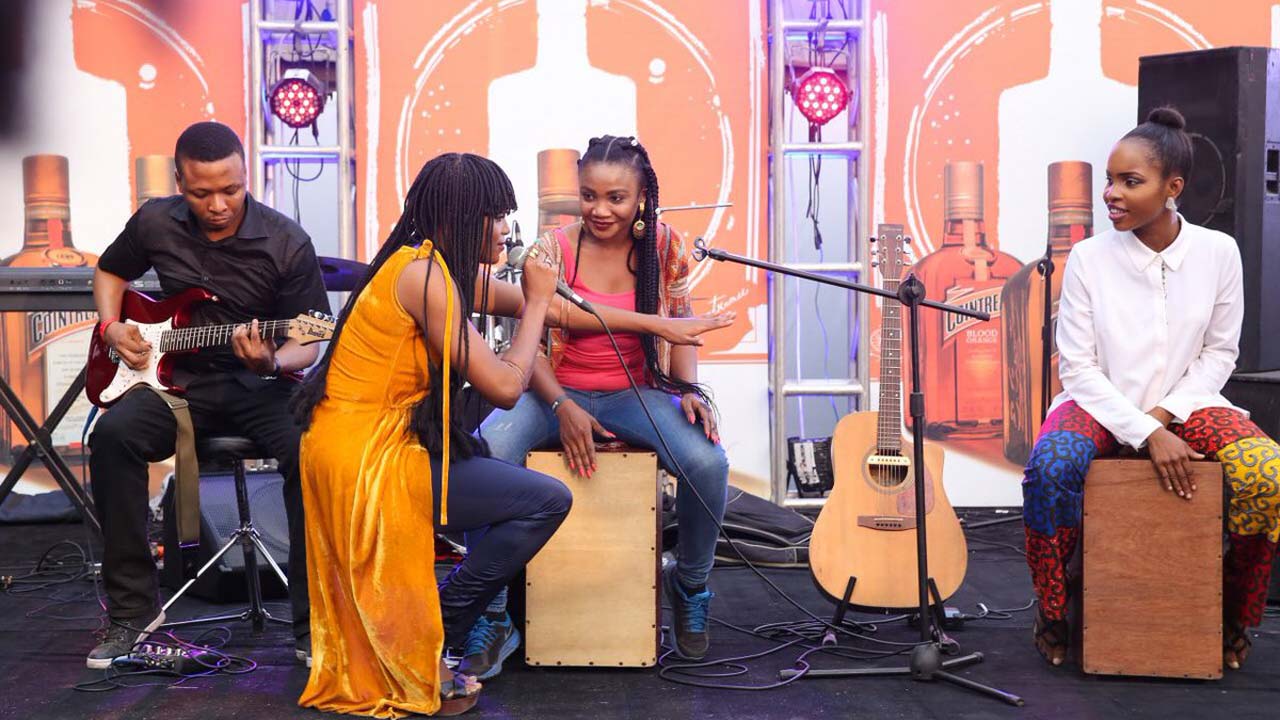 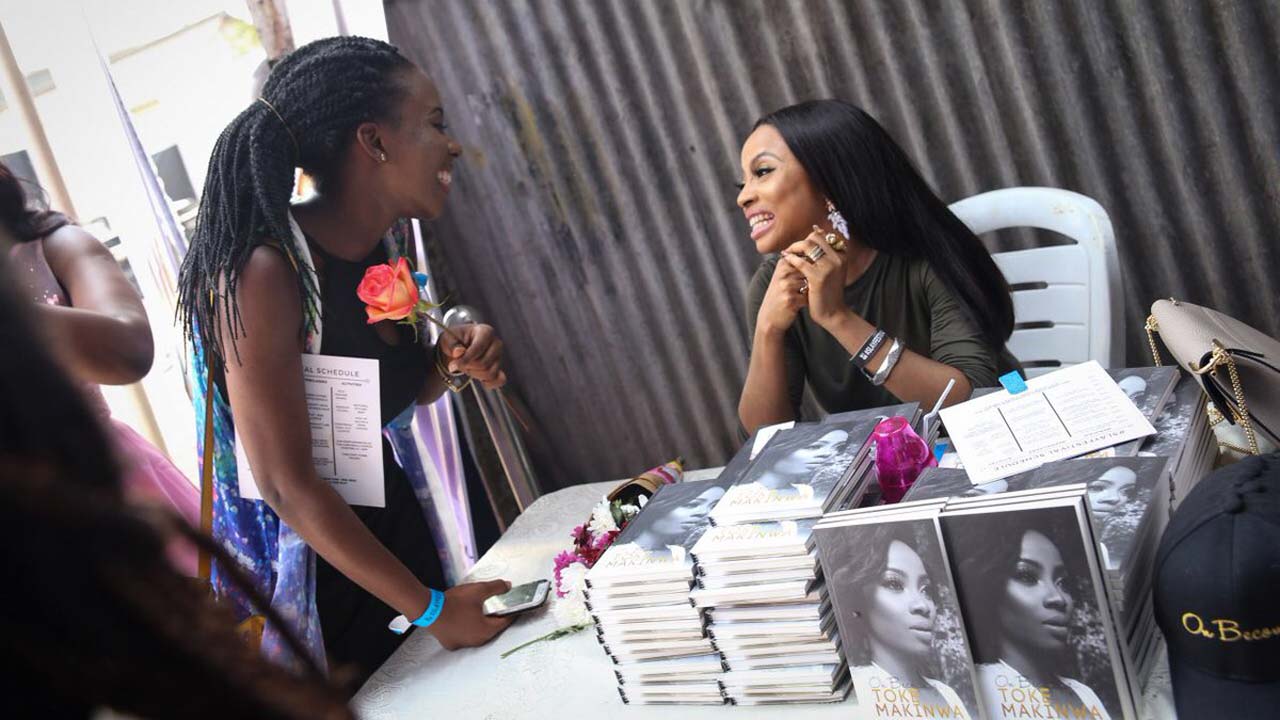 Seems like a pretty obvious rule right? Festivals usually mean music, stalls, a bit of arts, a bit of craft and lots and lots of standing. For some reason still unknown to me I, avid proponent and defender of flat footwear, decided to forgo that rule for the first SLAY Festival. Thinking that it’s Nigeria so when they say festival, they don’t really mean festival.

Turns out the crew at She Leads Africa really did.

The first edition of the SLAY Festival at Railway Compound,(also confusingly referred to as Railway Corporation) in Yaba was described by organizers as a ‘celebration of innovation, technology, culture and women,’ because ‘2017 is not the year for poverty, stress and worrying about stretch marks.’ Amen to that.

The festival offered a host of activities ranging from talks and masterclasses to free manicures and mehndi, and judging by the queues and the crowd,the ladies of Lagos were here for it. Railway Compound/Corporation was an interesting albeit it quite dusty (in the literal sense) choice of venue, definitely one that requires comfortable footwear but one that worked at incorporating the different elements of the festival.

There were lots of activities and lots more vendors selling everything from candyfloss to clothing, #BuyNaijatoGrowtheNaira indeed. There was a Cointreau lounge that served delicious cocktails and a Maggi corner where an innovative chef put a series of creative spins on jollof rice.

The crux of the festival centered on the different panels and subjects ranged from tech and media, to brand building and contracts. The panels featured a wide range of speakers who shared their experiences and gave advice to budding motherland moguls.

In a panel titled ‘Getting paid in the media,’ CNN’s Stephanie Busari shared how she started out as a freelancer and rose to heading CNN’s digital first bureau on the continent, a company first. The path to success is “not linear” she advised the crowd as she spoke of the importance of persistence and “getting your foot in the door.”

Kemi Adebita, director of ‘The Wedding Party,’ the most successful Nollywood movie ever, was also on the panel. She encouraged the crowd to look beyond the perceived glitz and the glamour of the industry and to ask real questions about whether or not it is for them. After sharing her experiences of gruelling shoots, she spoke of the importance of passion and left the crowd with food for thought. “Because you love an industry doesn’t mean you should be a part of it,” she said. “Do you have an eye for it?”

For those already on the path, seeking to build and monetize their brand, in stepped Toke Makinwa and Arese Ugwu dishing out words of wisdom on the importance of authenticity, humility, and collaboration. The two authors spoke about their early beginnings and overcoming self doubt thanks to a strong vision and support system,

Though female oriented and focused the festival did feature an all male panel that delved into how African men can adapt to the changing nature of traditional gender roles, which touched on issues of culture, sexism and getting ahead in a ‘man’s world.’

Alongside the panels, there were masterclasses on coding, presenting with confidence and unleashing inner creativity as well as an advice clinic where festival-goers could pick the brains of legal, marketing and tech experts.

All in all the SLAY festival did exactly what it advertised; celebrated culture, innovation and women. It had a bit of everything for everyone, (I forgot to mention there was a virtual reality lab and really, really good waffles), and judging by the all the happy selfies on Twitter the 1,000 strong crowd who showed up agreed.

I’m already looking forward to the second edition, but this time I’ll be armed with flats.

Nigeria
Presidential ticket: Consensus plot unsettling APC, PDP
2 hours ago
As Nigerians await President Muhammadu Buhari’s assent to the amended Section 84(8) of the Electoral Act 2022, the plan by the two major political parties, the ruling All Progressives Congress...
Nigeria
Buhari yet to sign Electoral Act Amendment Bill — Source
2 hours ago
There are indications that President Muhammadu Buhari has not signed the Electoral Act Amendment Bill, contrary to the notion in some quarters...
Nigeria
Youths stage simultaneous nationwide rallies for Bello
2 hours ago
Youths across the country made a huge statement on their steadfast support for the candidacy of Governor Yahaya Bello of Kogi State in the 2023 presidential election yesterday...
Sport
Peseiro’s first task must be to showcase NPFL’s talents, Elahor insists
2 hours ago
Former international, Friday Elahor, has maintained that the primary assignment of the newly appointed Super Eagles coach will be to develop, nurture and expose players in Nigeria...
Nigeria
HURIWA warns against branding actors, civilians as IPOB members
2 hours ago
Human Rights Writers Association of Nigeria (HURIWA), yesterday, cautioned security agencies, including the Nigeria Police, Nigerian Army and others to stop framing up Nollywood actors...

Guardian Life
Top 10 Movies To Binge-watch This Weekend
15 Oct 2021
It’s another weekend to binge-watch some of your favourite movies on Netflix. Need some time to relax after a stressful week? Nothing says comfort better than hot buttered popcorn and a foot soak while watching some of the latest movies in your loungewear. This weekend, create an at-home movie cinema experience without annoying audience members…

Saturday Magazine
Chinwetalu Agu… Travails of Nollywood elder
16 Oct 2021
There was uproar across the country penultimate Thursday when news filtered out that, men of the Nigerian Army in Onitsha, Anambra State, had arrested veteran actor, writer and producer, Chinwetalu Agu.

Guardian Arts
Akinmolayan: Telling African stories is a dream come true
17 Oct 2021
• Latest Project, Progressive Tailors Club Hits The Cinemas October 29 Niyi Akinmolayan is a filmmaker, the owner and creative director of Anthill Studios, one of the biggest animation studios in Lagos. The firm handles some of the biggest Nollywood films in terms of post-production and even production. He is also the highest grossing Nollywood…

Guardian Life
Gulder Ultimate Search Takes Elitist Innuendoes To The Jungle
24 Oct 2021
If you ignore the poor audio quality of Gulder Ultimate Search: The Age of Craftsmanship, the latest instalment of the once most-watched reality show on Nigerian television, long before BBNaija established itself as a cultural staple, what viewers are treated to is a desperate, off-brand, wonky production, from a team that has lost touch with the…

Style
Style Me Like A Rich Aunty!
31 Oct 2021
We all have that one rich Aunty (imaginary or real) that gives off this elegant, relaxed yet affluent vibe with her fashion style. While it’s not cheap to look the part most times, there are very simple tips to help you spark off that vibe on even the leanest of budgets. To begin your transition…

Saturday Magazine
GUS: End of the road for Oreva as Irin loses winning streak
20 Nov 2021
Irin's winning streak came to an unfortunate end at the hands of the other clans, and Oreva fate in Gulder Ultimate Search was cut short.