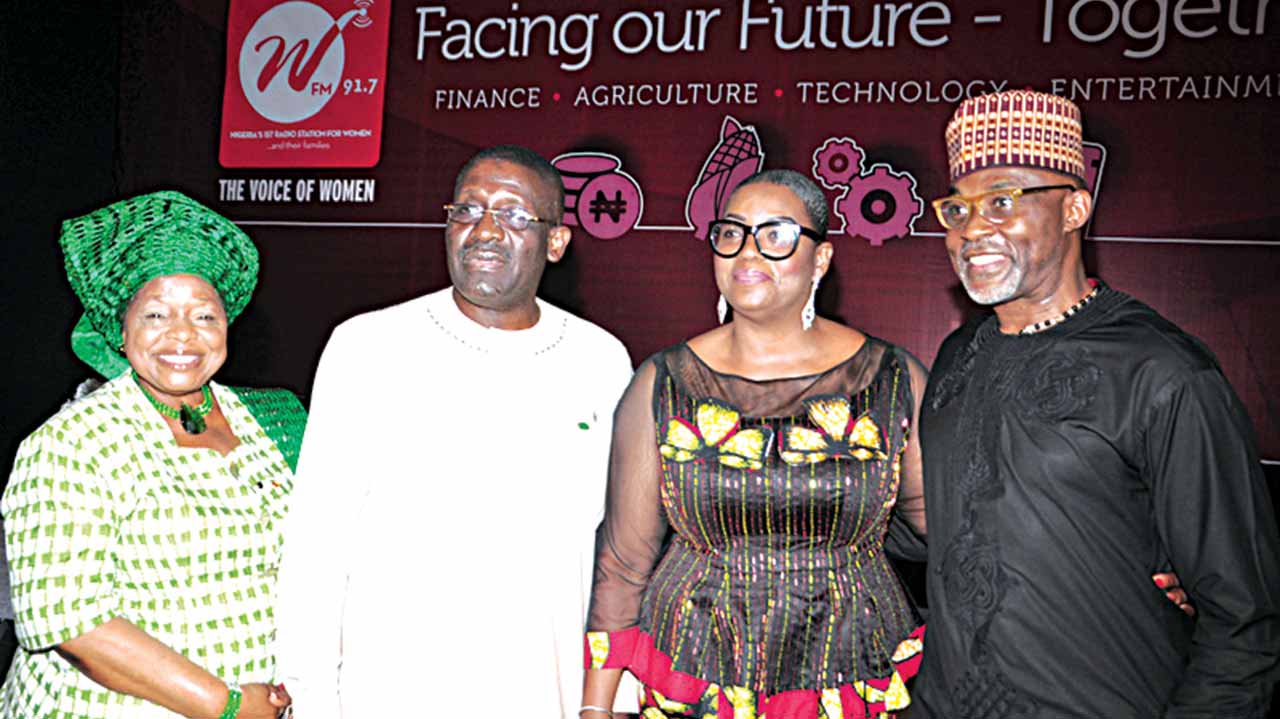 Iyalode of Yorubaland Alaba Lawson(left); Acting Managing Director,Bank of Industry, Waheed Olagunju; Chief Executive Officer,Wfm 91.7; Toun Okewale Sonaiya and Richard Mofe Damijo. At the 2016 Voice of Women Conference and Awards with the THEME;Facing our Future Together 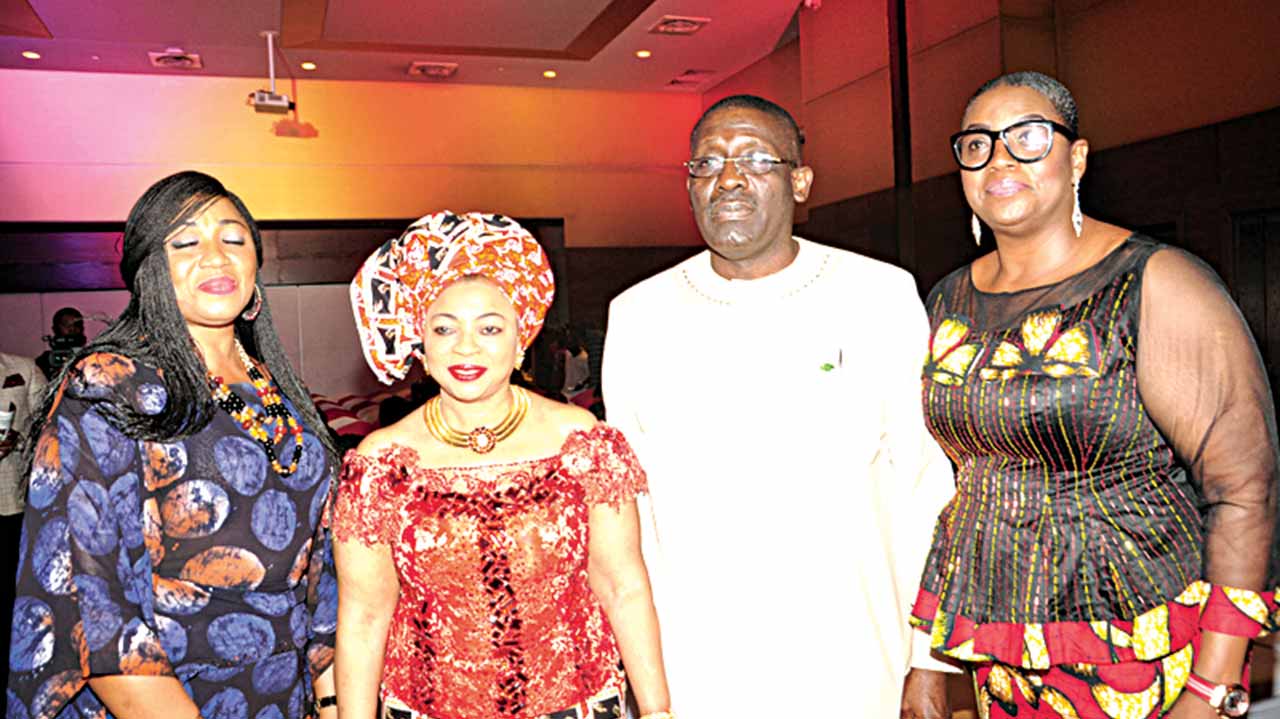 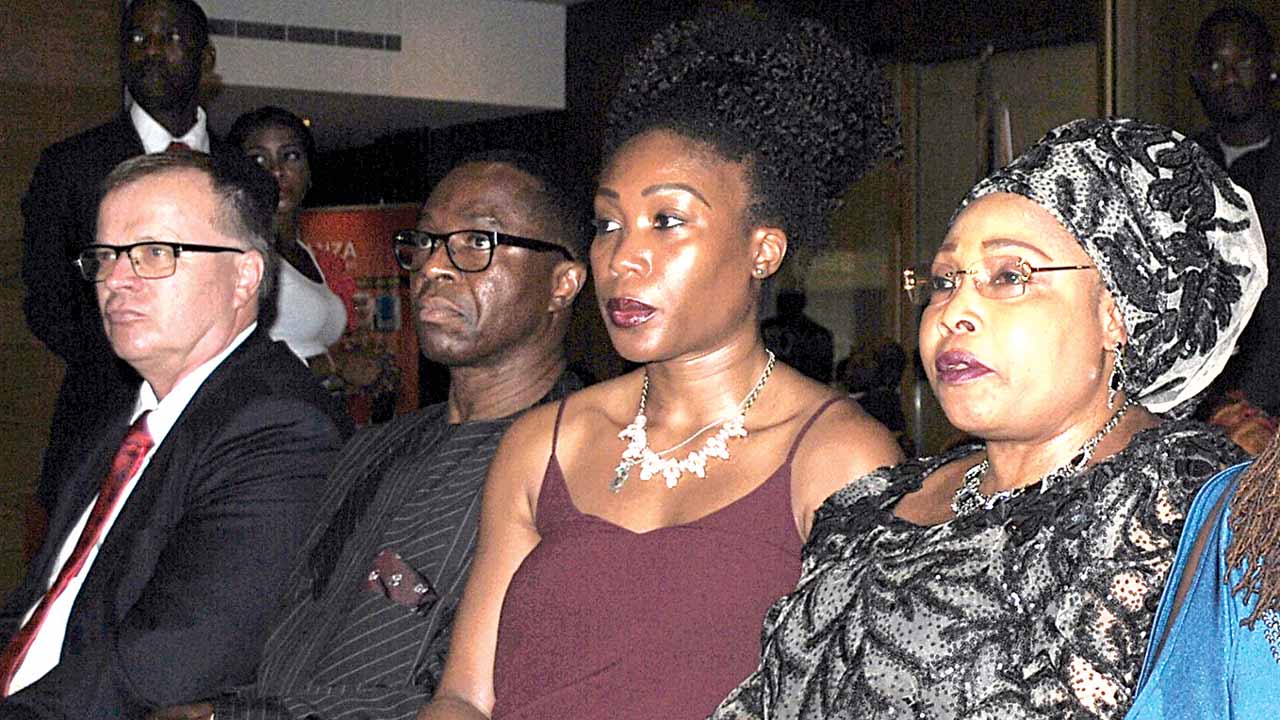 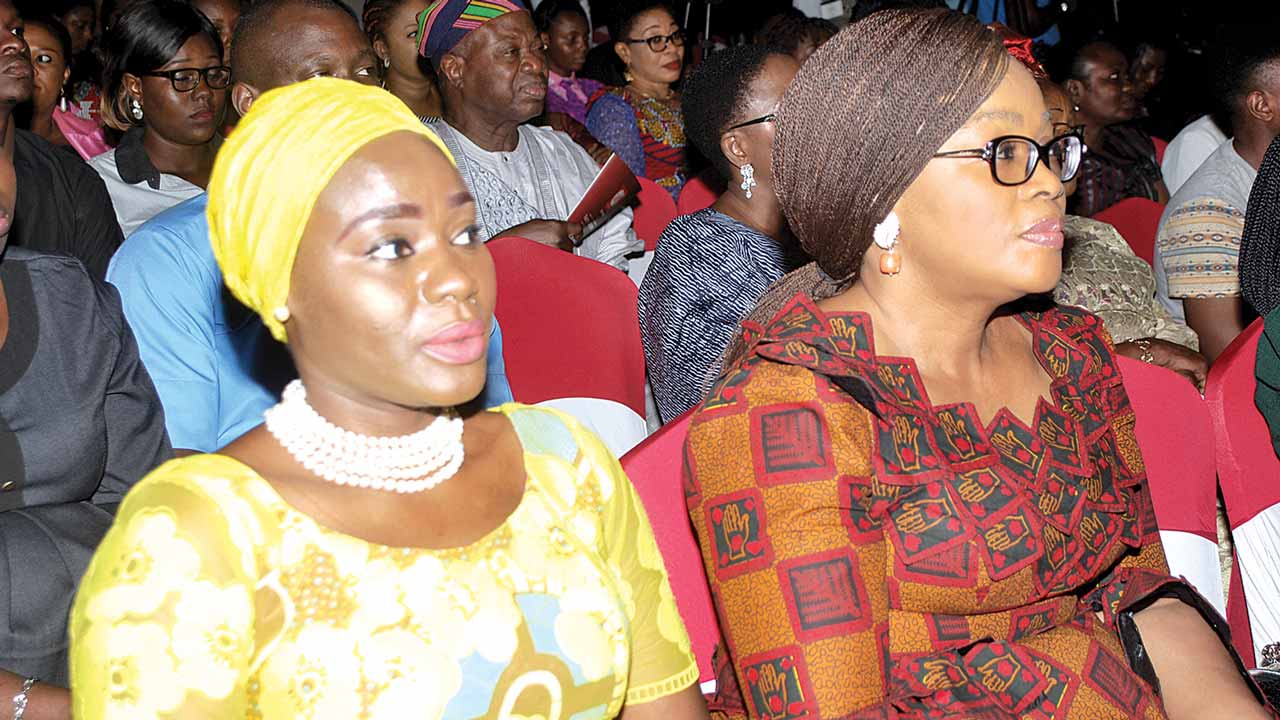 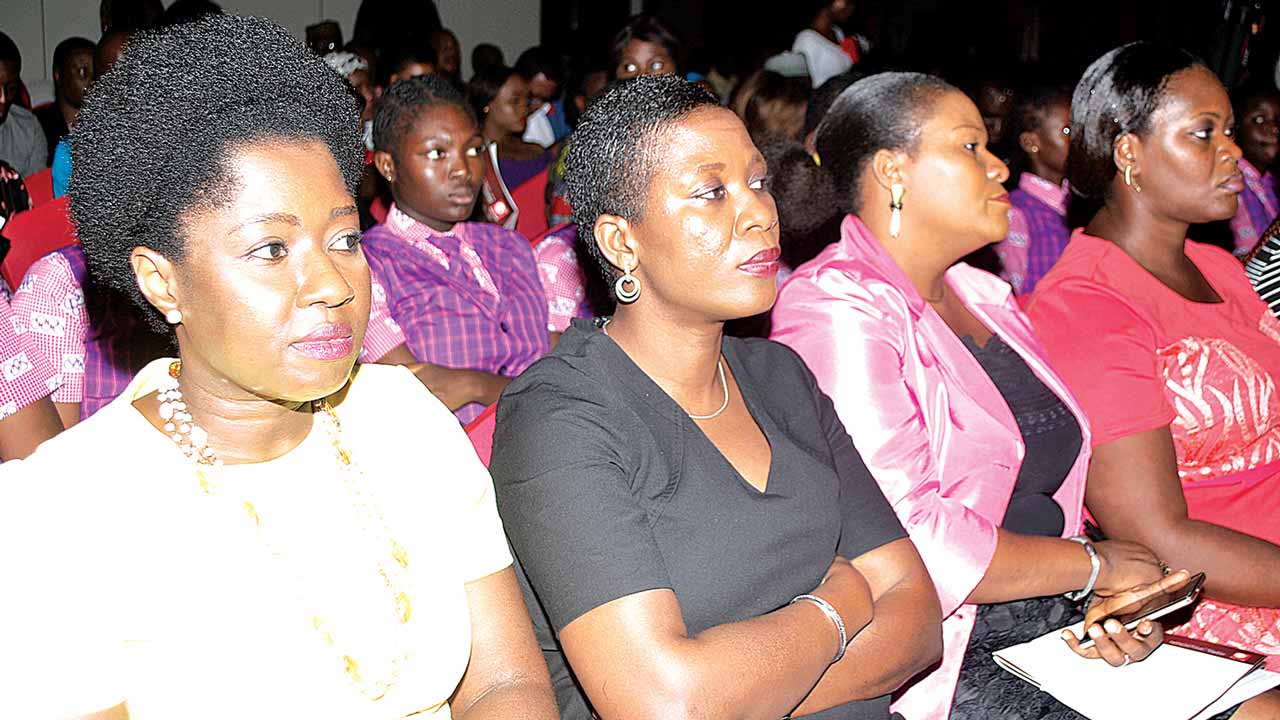 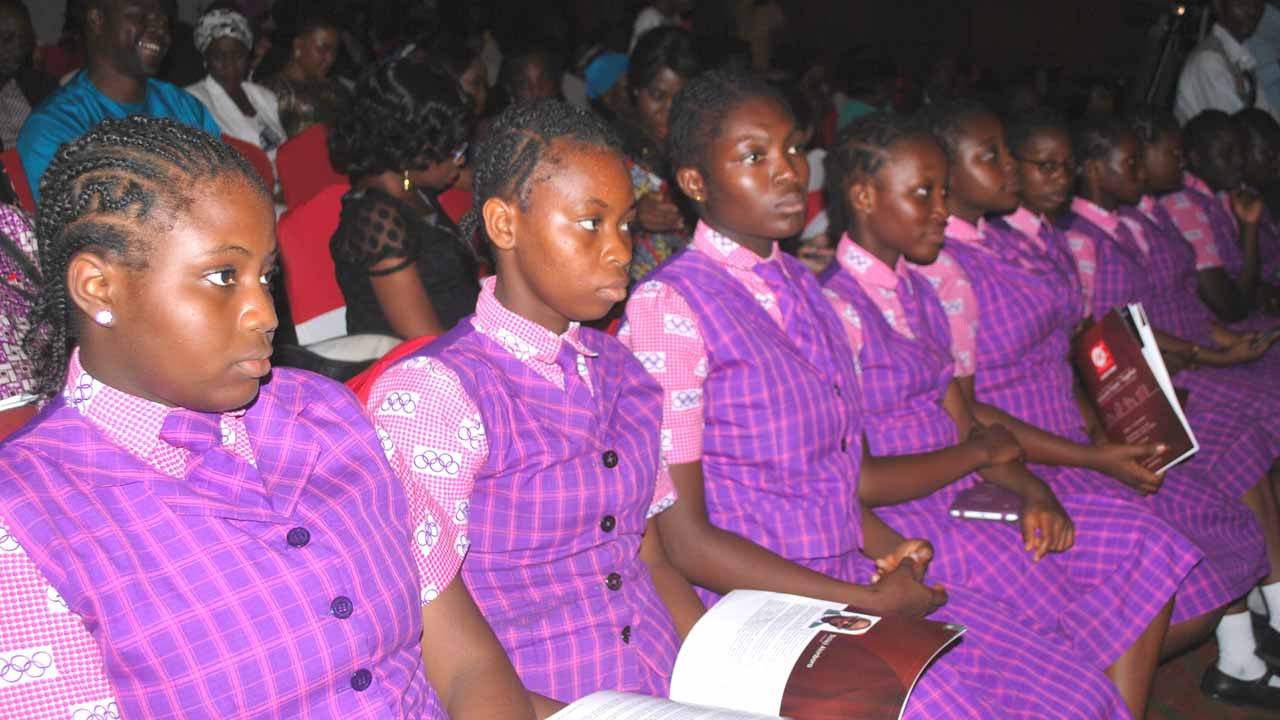 In a welcome address delivered by the chairperson of the occasion and founder, Rose of Sharon foundation, Mrs. Folorunso Alakija, she said: “According to the United Nations, Nigeria has an approximate population of about 187 million people of which 49 per cent of them are women, reports also indicate that 53 per cent (of the 49 per cent) are women between ages 15 and 65, the working class women. This class gets involved in various enterprises and will move this country forward.

“Women are more active as economic agents in Africa than anywhere else in the world, it shows that we make up two-third of the agriculture workforce and produce the majority of Africa’s foods. Women are incredible; they juggle different roles successfully from the home front to their various business. The world economy is now such that the men cannot do it alone, so we need to stand up to our responsibilities to move the nation to where it ought to be.”

Chief Executive of Stanbic IBTC, Sola David-Borha, while speaking on finance in growing the Nigerian economy, said that there is no need for the nation to be in a recession since we do not lack anything. “The most important asset is the people of which a majority is women. Across the globe where women are gainfully employed, their GDP growth is higher.

“There are sectors where women can be actively involved in the economiy, the challenge will be to equip women with skills, information and capacity building that is required to monetize the work they are doing. When you look at the entire value chain, you find out that women are taking the short end of the stake.”

David-Borha advised that women should ensure they get the right kind of financing for the right need/project, as good financial management is critical to any business. The failure rate of startups is very high, so whether you are a man or woman, you must gather the right knowledge, support and take the right decisions very early in your business.

“One out of every three SMEs have a business plan, you must do the right research. Ensure you build the right record, that is what a financier is interested in. You should continue to train and scale up yourself, be current with the development in your space and add value in a way that people will continue to seek your services,” she added.

On the role of agriculture in the growth of the Nigerian economy, Managing Director, Bank of Industry Waheed Olagunju noted that agriculture is one area where the nation has the strongest competitive advantage. “We have competitive minerals and resource endowments. Agriculture provides food and raw materials for developmental impact.

“We need to feed ourselves, we are a huge population and so we need to grow food across the length and breadth of this nation. All the 774 local government areas have their comparative advantage; we are all endowed and it is for us to know what the opportunities are and harness them. For us to grow as a nation, we must be agric-led, the government can only provide an enabling environment for agric to strive.”

On technology, the General Manager Eko Distribution Company Dele Amoda represented by Sheri Adegbenro said that there are better days ahead in the power sector even though it looks bleak, “we can only more forward, there is no going back.”

Commending the role of technology to the growth of the power sector, she added that it has afforded the opportunity to serve Nigerians better by monitoring activities from systems instead of going to the homes of millions of Nigerians which will require a large workforce to achieve.

Veteran actor and former Commissioner for Culture and Tourism in Delta State Richard Mofe-Damijo, who spoke on the role of the entertainment industry, said that women are the most powerful in the sector, urging them to bring more of their folks into the industry. He, however, lamented the place the nation has kept entertainment even though it has earned respect for the nation across the world.

“What defines us as a people is our culture (dress sense, the way we dance, shake hands, eat) and so the government as custodians should give policies that are not dependent on party in power but are channeled for growth,” Mofe- Damijo added.

Nigeria
Okorocha loses as NUC hands over Mbadiwe varsity operating certificate to Imo govt
16 mins ago
The National Universities Commission (NUC), has presented the operating certificate for the Kingsley Ozumba Mbadiwe University, Ogboko, to the Imo State government.
Nigeria
Forbes lists Okonjo-Iweala, Mo Abudu among 100 most powerful women in 2021
21 mins ago
Nigeria's former finance minister and current director-general of the World Trade Organisation Ngozi Okonjo-Iweala and filmmaker Mo Abudu have been recognised by Forbes among the world's most powerful women in 2021.
Nigeria
NAPTIP seeks more media synergy
35 mins ago
Director-General of the National Agency for the Prohibition of Trafficking in Persons, (NAPTIP), Dr. Fatima Waziri-Azi, has called for a stronger partnership with members of the fourth estate to strengthen the fight against human trafficking in Nigeria. She made the call at the opening of a three-day media training workshop held in Keffi, Nasarawa state…
Sport
Barcelona to 'start from scratch' after Champions League exit
54 mins ago
Barcelona coach Xavi Hernandez vowed to return the Spanish giants to the pinnacle of European football after they crashed out of the Champions League on Wednesday with a 3-0 defeat at Bayern Munich.
Nigeria
Body of kidnapped Nigerian found in South Africa
55 mins ago
The body of a Nigerian man who was kidnapped has been found near a bush in Durban, South Africa. Forty-two-year-old Johnathan Eloho Okinedo was kidnapped on Saturday, according to his family. His body was, however, found with a gunshot wound to his head. Reaction Unit South Africa (Rusa) said an investigation is ongoing on his…

Saturday Magazine
IWD: Ambode’s wife urges states to enact laws on rights of widows, as RoSF empowers them
8 Jul 2017
Worried by the travails and plight of widows in the country, the wife of Lagos State Governor, Mrs. Bolanle Ambode, has called for enactment of laws that will protect the rights of widows...

Nigeria
Christian ministry proffers solution to marital deadlocks
23 Sep 2017
The rate at which marriages are crashing into irredeemable state in Africa and the world at large has become alarming, hence the prompt response by the richest woman in Africa Mrs. Folorunso Alakija...

Nigeria
Alakija donates N250million for completion of university road
21 Oct 2017
The Governor of Osun, Ogbeni Rauf Aregbesola, has described the situation where operators of Universities in Nigeria rely on subvention from the owners and burden students with humongous tuition fees as intellectual laziness.

Nigeria
Funding: Aregbesola challenges varsities on creativity
22 Oct 2017
The Governor of Osun, Ogbeni Rauf Aregbesola, has described the situation where operators of Universities in Nigeria rely on subvention from the owners and burden students with tuition fees as intellectual laziness.

Nigeria
ROSF offers enterprise skills training, empowers widows, orphans
28 Oct 2017
Wife of the Governor of Lagos State, Mrs Bolanle Ambode, who was the guest speaker at the event, said for widows to survive, they should have sustainable income.