By Ann Godwin, Port Harcourt
Share on Facebook Share on Twitter Share on WhatsApp Share on Telegram
Some women from Ogoni ethnic nationality in Khana Local Government Area of Rivers State yesterday Protested half nude, calling on the Rivers State Governor, Nyesom Wike, to release their son and the manager of the demolished Prodest Hotel, Dr Bariledum Azoroh
1 of 10 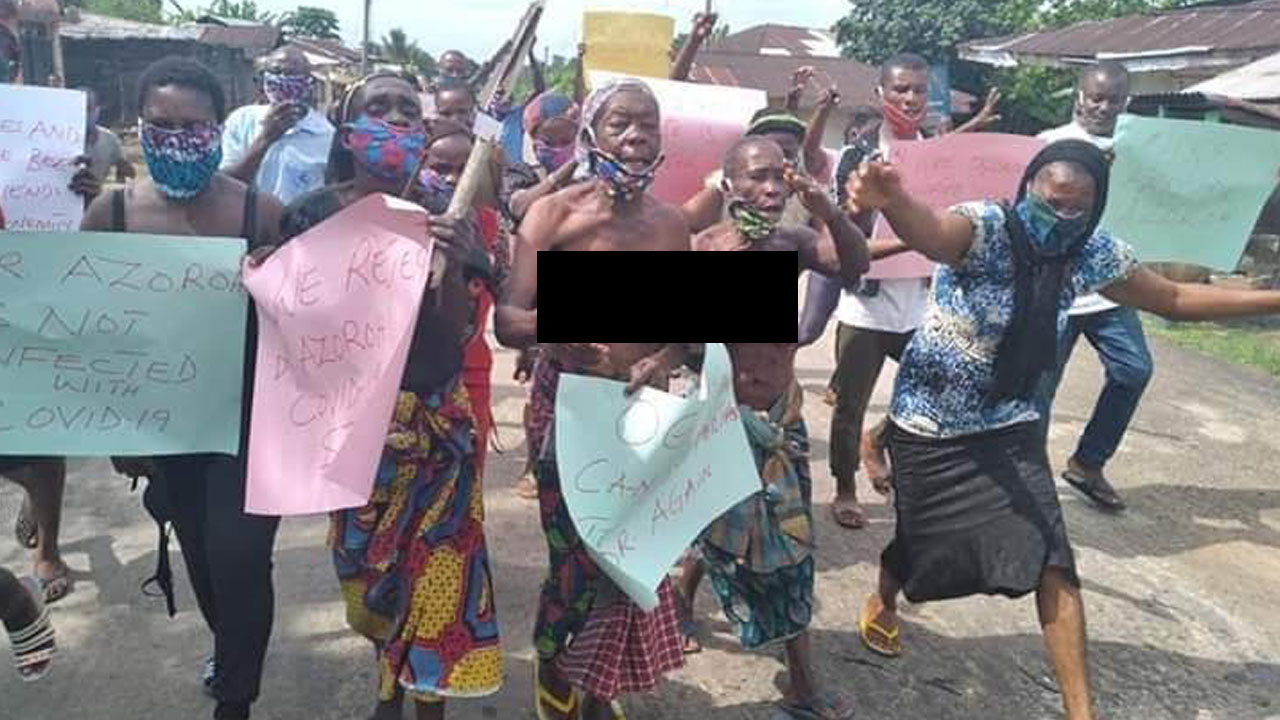 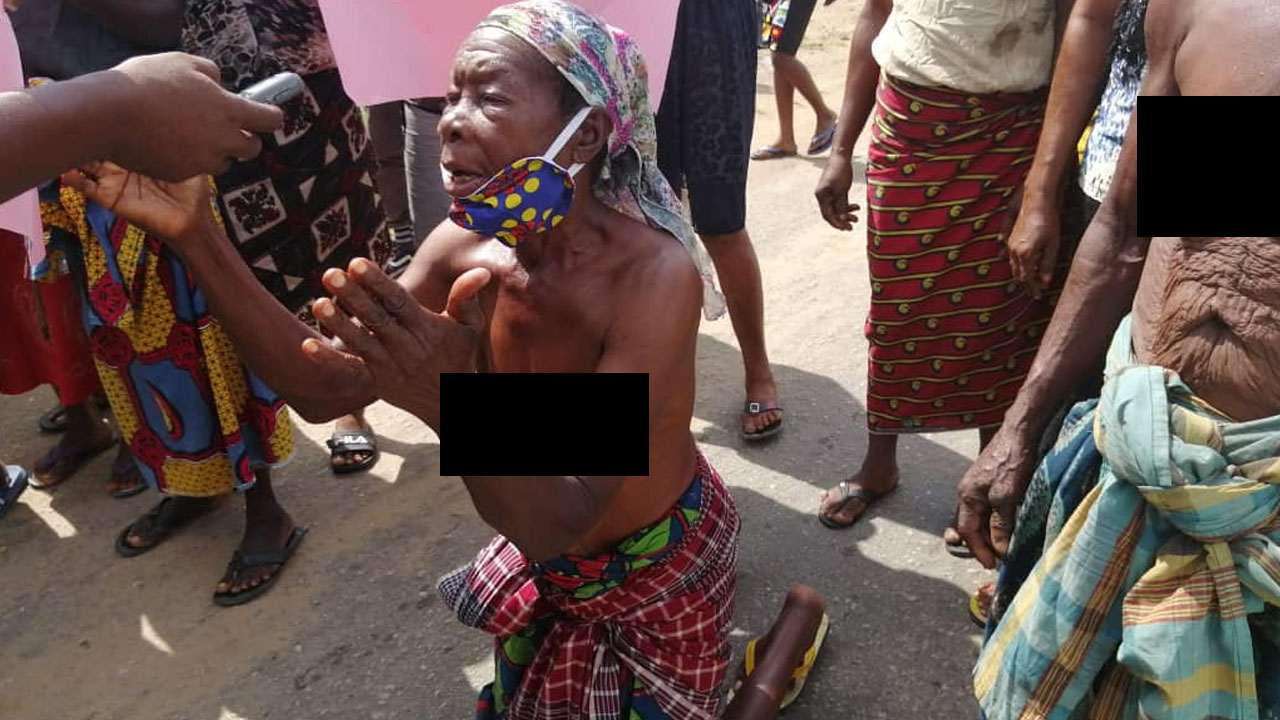 Some women from Ogoni ethnic nationality in Khana Local Government Area of Rivers State yesterday Protested half nude ,calling on the Rivers State Governor, Nyesom Wike, to release their son and the manager of the demolished Prodest Hotel, Dr Bariledum Azoroh

The women including the mother of the hotel manager, Mrs. Azoroh Lesi Beewo, threatened to go total nude if their son, Azoroh is not released to them soon.

The Manager of Prodest Hotel, Dr Azoroh was arrested and detained for about three weeks now when the hotel was demolished and on May 24, 2020 , the State government declared that he (Azoroh) tested COVID-19 Positive among 26 others.

A declaration that has attracted so much criticism by residents and opinion analysts.

The protesting women aged between 65 to 70, carrying placards with inscriptions such as “Wike why do you hate us”, Ogonis cannot loose another son again”, Wike release our Son” marched through the streets and roads in Bori, the Khana Local Council headquarters .

The mother of the victim, Mrs. Azoroh who led the protest, said, “My son is innocent since I was born, I have never seen such intimidation and victimization in my life, pls Governor Wike release my son”

“As a mother, I have been traumatized and fell sick since the arrest of my son, Governor please,I believe you have a mother and brothers, how would you feel if someone treats them the way you are treating my son?

It was gathered that the hotel manager has been moved from Elekahia Isolation centre to Eleme quarantine centre.

Meanwhile,the Hotels Nigeria Association in Rivers State has appealed to the State Government to relax the ban on hotel businesses, assuring that all protocols put in place for the containment of the spread of the virus would be fully observed by hoteliers.

The appeal was tendered yesterday when the Executive of the union paid a courtesy visit to Governor Wike, at Government House, Port Harcourt.

The State Chairman of the association, Mr. Eugene Nwauzi,however commended Governor Wike for leading the fight against coronavirus in the country.

Responding, Governor Wike noted that the State Security Council takes all decisions in the prosecution of the COVID-19 pandemic in the State.

He maintained that all decisions taken by the State Government are for the overall good and interest of the Rivers people as no right-thinking government would deliberately take decisions that would negatively affect the lives of the people.

The governor said, “I don’t take decisions alone in the fight against COVID-19. All decisions are taken by the State Security Council and they are for the overall interest of Rivers people.

” You know people applaud government decisions when it suits them but when it does not favour them they say it is politically motivated.

“Rivers State Government does not have anything against hoteliers in the state, but decided to shut down their activities because some cases of COVID-19 were recorded in hotels,” he stated.

Governor Wike also blamed the hoteliers for failing to assist government in providing relevant information regarding those that test positive of the coronavirus in their hotels.

According to him, adequate information would have helped the State Ministry of Health and other relevant agencies to carry out proper contact tracing.

“Its not possible that the State Government will intentionally close down hotels. But what I see is that people play politics with everything.

“The demolition of Prodest Hotel and Etemeteh Hotel in Eleme Local Government Area by the State Government became necessary because the owners failed to comply with Executive Order 7,” he said.

The State Chief Executive stated that he is more pained than any other person in the state that churches and mosques are not holding their full religious activities because of COVID-19.

“I can’t believe that I will be sitting here as a Governor and take a painful decision that will make churches and mosques not to hold full religious activities, ” he said.

The Governor lauded members of the State Chapter of Nigeria Hotel Association for identifying with government efforts in the fight against COVID- 19.

World
UK's Johnson welcomes second child with wife Carrie
NOW
UK Prime Minister Boris Johnson on Thursday became a father again, after his wife, Carrie, gave birth to a girl, Downing Street said.
World
Denmark arrests four spy agency employees for espionage
14 mins ago
Denmark's security service PET said Thursday it had arrested four intelligence employees suspected of leaking confidential documents.
Nigeria
Okorocha loses as NUC hands over Mbadiwe varsity operating certificate to Imo govt
32 mins ago
The National Universities Commission (NUC), has presented the operating certificate for the Kingsley Ozumba Mbadiwe University, Ogboko, to the Imo State government.
Nigeria
Forbes lists Okonjo-Iweala, Mo Abudu among 100 most powerful women in 2021
37 mins ago
Nigeria's former finance minister and current director-general of the World Trade Organisation Ngozi Okonjo-Iweala and filmmaker Mo Abudu have been recognised by Forbes among the world's most powerful women in 2021.
Nigeria
NAPTIP seeks more media synergy
51 mins ago
Director-General of the National Agency for the Prohibition of Trafficking in Persons, (NAPTIP), Dr. Fatima Waziri-Azi, has called for a stronger partnership with members of the fourth estate to strengthen the fight against human trafficking in Nigeria. She made the call at the opening of a three-day media training workshop held in Keffi, Nasarawa state…

Law
Alternative Dispute Resolution Regulatory Commission will limit party autonomy in arbitration, says Lawrence-Nemi
23 Nov
Alice Lawrence-Nemi is a lawyer and renowned international arbitrator. In this interview with JOSEPH ONYEKWERE, she speaks on the merits, challenges and the future of commercial arbitration in Nigeria.

Nigeria
Fight against oil theft fails because of military involvement, Wike alleges
23 Nov
Governor of Rivers State, Nyesom Wike, has alleged that the fight to stop oil theft has continued to fail because top-ranking officers of the military are involved in it.