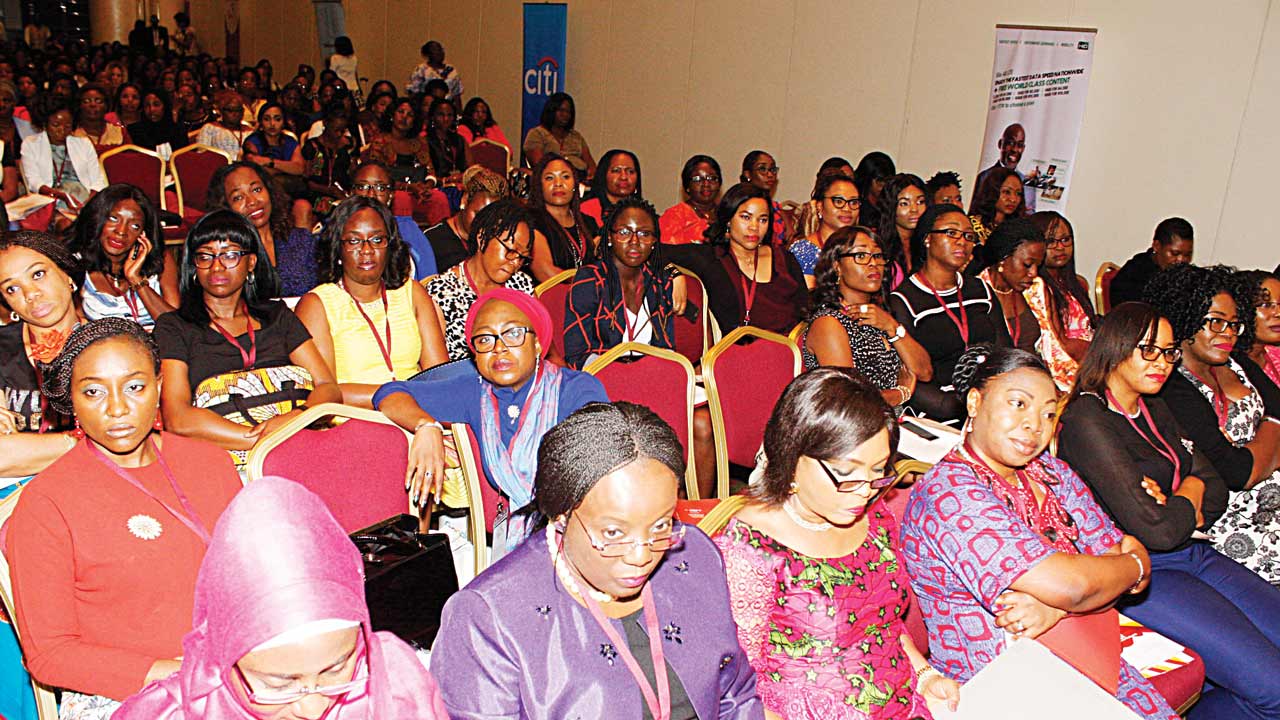 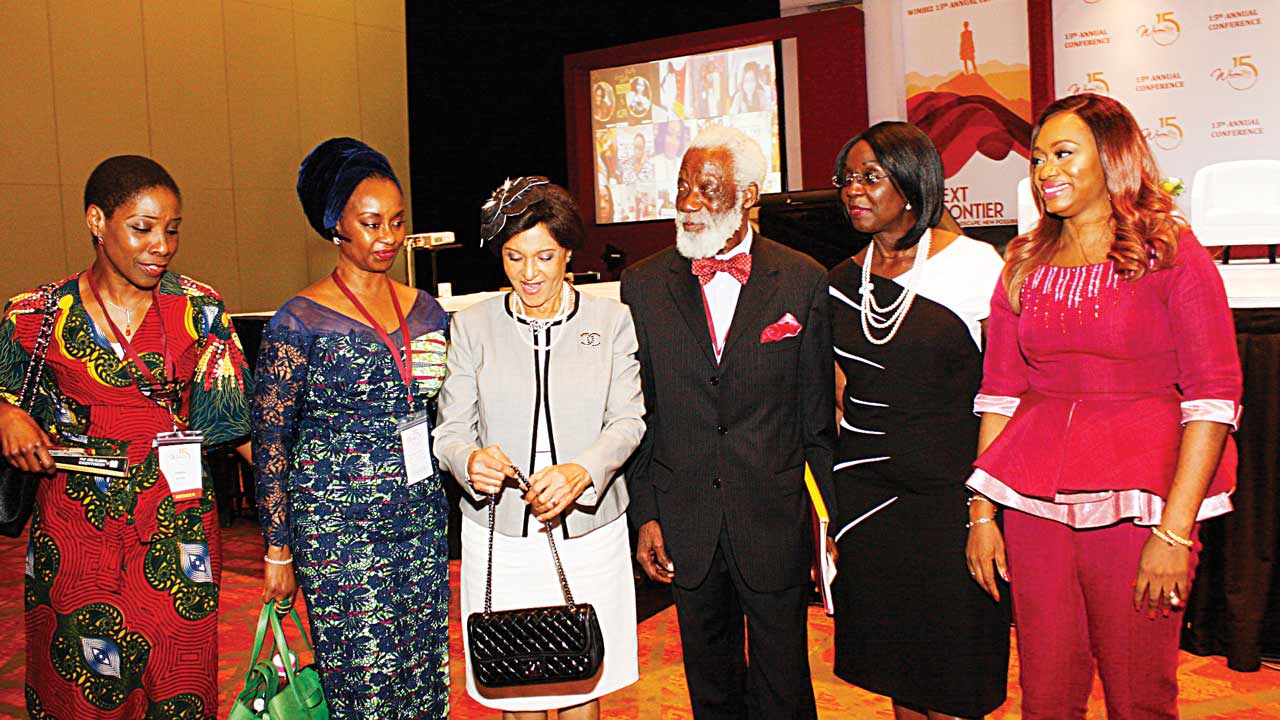 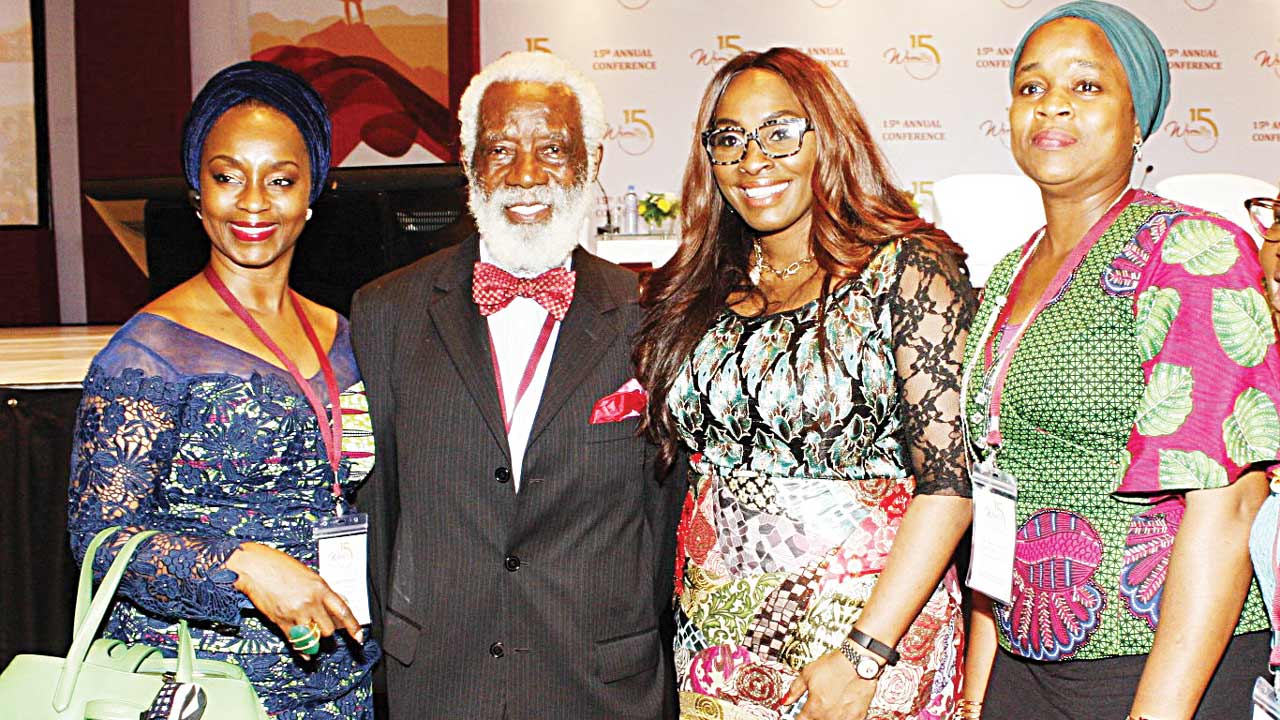 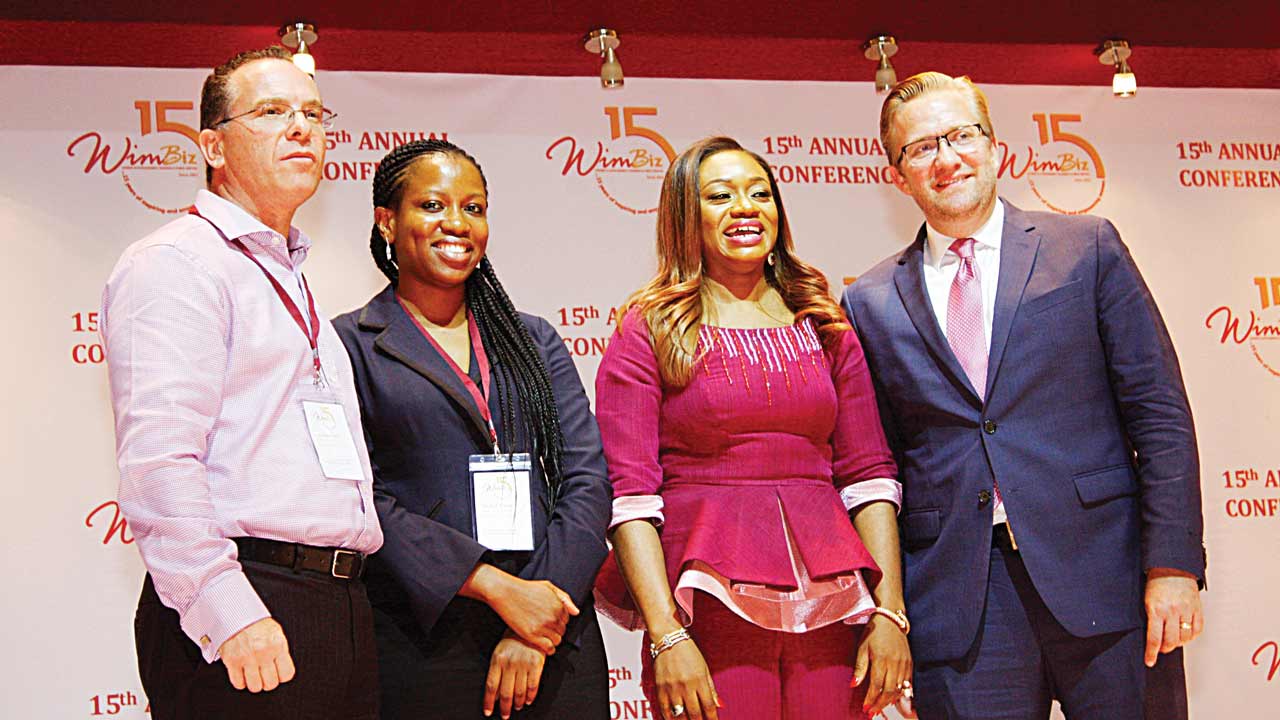 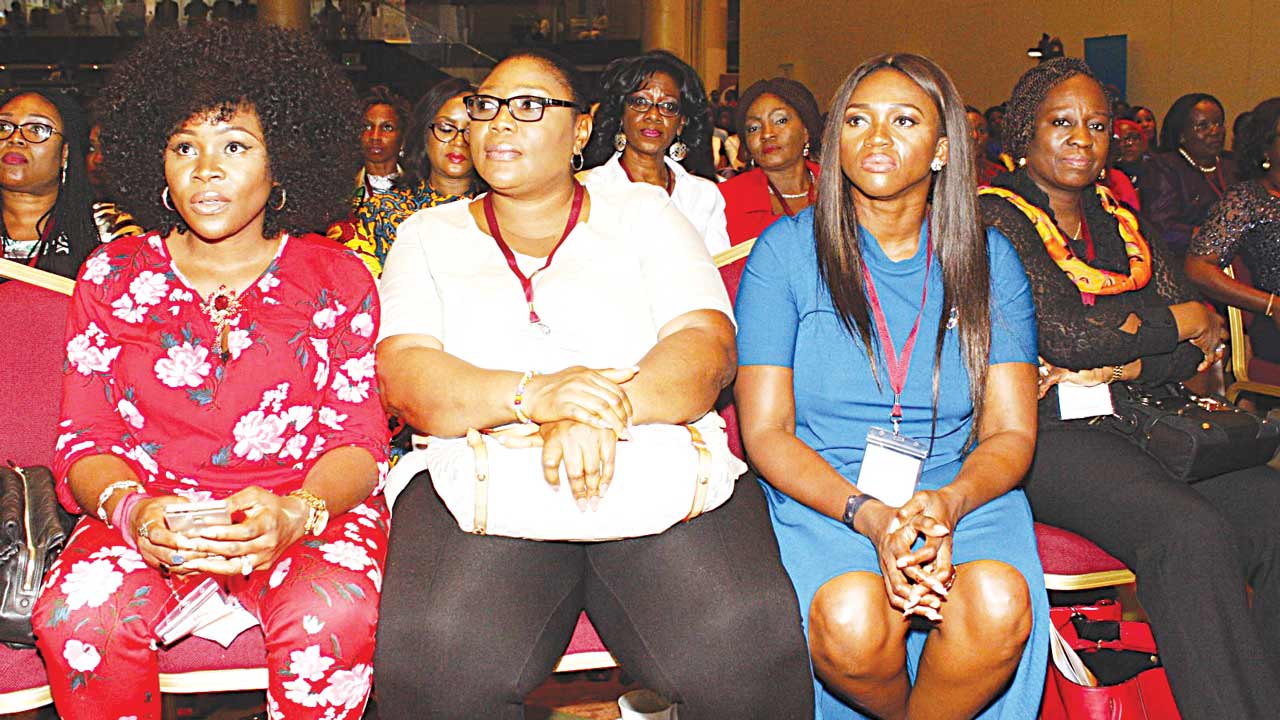 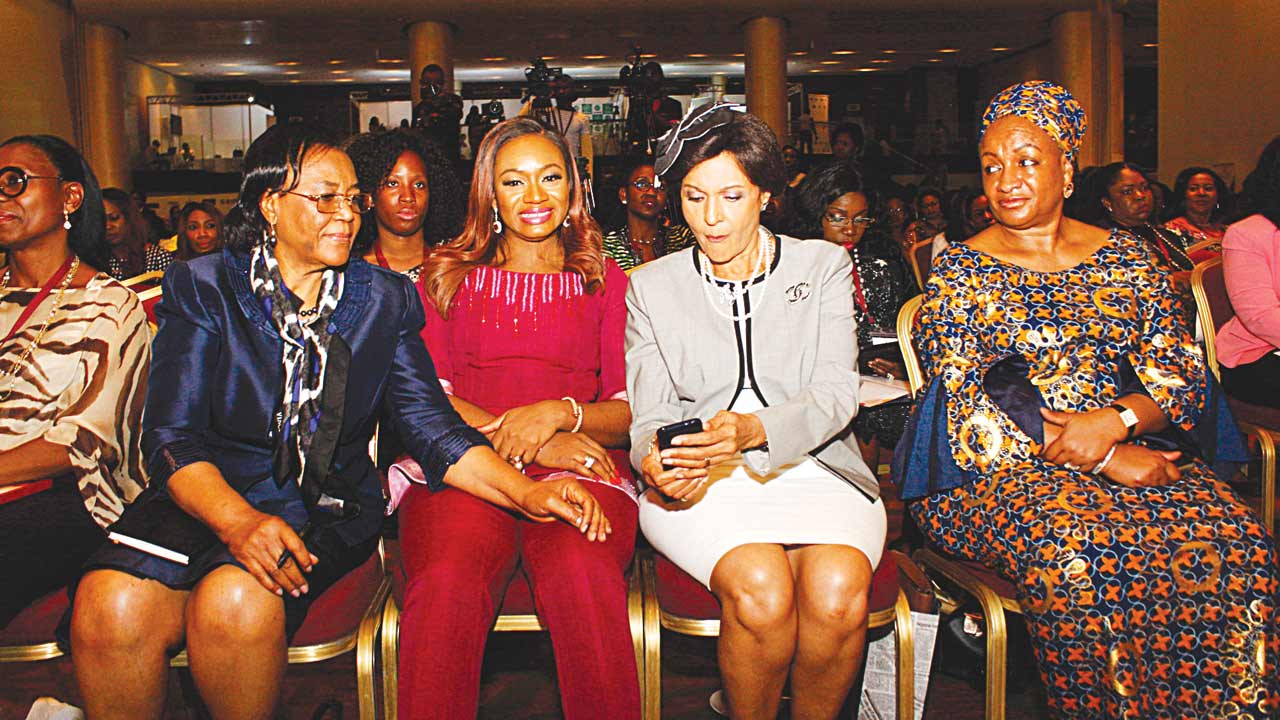 Women from all walks of life gathered this week at the Eko Hotel and Suites, Victoria Island for a two-day conference organized by the Women in Management, Business and Public Services (WIMBIZ). It was the 15th edition of its annual event themed: “The next frontier, new landscape, new possibilities.

The former Permanent Representative of Nigeria to the United Nations, Prof. Joy Ogwu, said that women must begin to think creatively on how to make an impact in the society and support the system instead of waiting for the government. She said that since women constitute half the population, it proves that they are strategic national and international assets.

“With more women in the entrepreneurial and professional world, they provide the key to sustainable development. Nigeria is rich in human resource; we have to deplore expertise in these sectors to build our economy.”

According to the Chairperson of WIMBIZ Aisha Ahmed, the economy is undergoing a slow but significant transformation and it is important that women are well positioned to ensure they remain relevant in the new economic order that is sure to emerge.

In a keynote address delivered by Dr. Adedoyin Salami, a senior fellow and lecturer at the Lagos Business School, he said that women are strategically important but unless they harness their resources, it remains untapped. “Women who have the capacity to influence must begin to advocate the kind of change they want to see, else there is no need to complain.”

While noting that the single biggest challenge in agriculture is storage, Dr. Salami said that the nation’s over-dependence on foreign commodity is evident in our fallen currency. He, therefore, noted that being the next frontier is not about being a home-maker, economically or politically empowered, but a review that helps women become strategic and valuable assets.

In a plenary session headed by Partner, Banwo and Ighodalo and Chairman, Sterling Bank Plc, Asue Ighodalo on Beyond Parity: Inspiring The Next Wave of Female Leaders, Senator Biodun Olujimi spoke on the few number of women in politics.

According to her, the problem we have is that women are not attentive enough and this is a function of what we have done in the past. “When women were elected deputy governors in the last regime, we felt we had arrived and didn’t need to push each other again and so we were taken for granted. We have not worked hard enough as women; in politics nobody gives it to you. Most women don’t want their hands soiled, you have got to fight and prove yourself. Most times, we want to be delicate and stay in our comfort zone,” she noted.

On the issue of women being supportive of each other, she said: “I think we have learnt our lessons. Women have been marginalized and we need some form of legislation to bring this to fore. We are over 50 per cent of the entire population and so we need to come together as a group, that is why I think the Gender Equality Bill has not seen the light of day. Issues of girl child marriage, education and even women inheritance should be critically addressed. Without legislation, we will be paying lip service to our needs.

“Men are not ready to let go, they do not support women because they don’t want to see women acting strong. As a wife, you should act like you are a weakling and make the man feel he is in charge when actually you are the one in charge,” she added.

While speaking on the future of work, leveraging the power of 160 million, Executive Director and Chief Financial Officer of Union Bank Plc, Oyinkan Adewale, noted that even as technology tends to disrupt manpower, people will still remain relevant. “In the banking sector where technology has also come with ATMs to replace cashiers, people will still be needed to load these ATMs and write the technology that runs the ATMs. For every job that marginalizes, new innovation emerges and so it is necessary to develop skills that keep us relevant.”

For Ben Afudego, Partner, Advisory Services EY West Africa, the three qualities that will determine the future of work are ethics/conducts, diversity and innovation. “Companies want to make profit and so they will continue to innovate, as that is the only way they can grow. It is important for our young people who graduate from universities to spend time on developing skills that will make them relevant for the future.

Peter Bankole, the Director of Enterprise Development Centre, Pan-Atlantic University stressed on the importance of understanding what drives young people. “There shouldn’t be a difference between the way we work, learn and enjoy. We need to create an environment where you allow learners bring out their best; the same way we will develop creativity to drive businesses.”

Meanwhile, at a pre-conference event that witnessed the launch of the ‘Women Matter Africa’ report with Mckinsey, presented by its partner Tiana Holt and engagement manager Amuche Okeke-Agba, the facts on the report were drawn from a research undertaken at over 200 African companies and interviews with more than 30 women leaders across the continent.

According to their findings, which show a case of gender diversity in leadership in Africa’s public and private sectors, it reveals that companies with more gender diverse boards tend to perform better financially. Companies with at least a quarter Wshares of women on their boards were on average 20 per cent higher than the industry average. While only five per cent of women in Africa occupy CEO positions, 29 percent are senior managers and only 36 per cent of promotions go to women even when more progress is achieved in an organization if there are a higher number of women.

“It is necessary for organizations to set targets and key performance indicators for women’s representation in leadership and the broader workforce and review these targets regularly as well as lead communications on gender diversity strategy,” Holt said.

Reacting to the findings, Aisha Ahmed said: “It is important for us to keep the conversation going, this shows that research does validate the point that women are a positive force for every company. It is also good for companies to keep on trying to track their gender statistics which not many of them do and so if organisations are not counting, they cannot tell the way forward.

“We need to take active steps and that is what WIMBIZ is doing with its WIM-board programme; we are actually putting our money where our mouth is and saying we are going to create an institute and make women board-ready, give them the skills that they need, we want to create a database because many companies say they don’t know where the women are. We will continue to do advocacy, go to these companies and talk to them and walk through with them.”

World
Berlusconi pulls out of Italian presidential race
1 day ago
Billionaire former premier Silvio Berlusconi withdrew from the race for Italy's presidency on Saturday, two days before voting starts, but repeated his opposition to Prime Minister Mario Draghi taking the job.
Nigeria
We won't allow killer herdsmen, Kidnappers in our forest, says Ogun Govt
1 day ago
Ogun State government, yesterday, said it will not allow any part of the state to be taken over by terrorists, killer herdsmen, kidnappers or bandits as a safe haven to unleash mayhem on the people.   The government said it is already collaborating with neighbouring states like Oyo and Lagos, to comb its forests and…
Sport
Laporte rescues Man City in Southampton draw
1 day ago
Manchester City's 12-game winning run in the Premier League came to an end as Aymeric Laporte rescued a 1-1 draw against Southampton on Saturday.
Sport
Dzeko strikes late to save Inter against Venezia
1 day ago
Edin Dzeko made sure that Inter Milan would hold off their Serie A title rivals on Saturday with a last-gasp strike which gave the league leaders a 2-1 win over Venezia.
Sport
Rashford sends Man Utd into Premier League top four
1 day ago
Marcus Rashford struck with virtually the last kick of the game to take Manchester United into the Premier League top four at West Ham's expense with a 1-0 win on Saturday.

Nigeria
Be politically savvy, experts charge women at The Guardian’s IWD Summit
28 Mar 2021
The need to create more space for women to participate actively in the socio-political and economic development of the country received another boost yesterday at The Guardian’s International Women’s Day Summit....

Nigeria
Bagudu, Obiano, Usman, Tinubu, Tallen, Okonjo-Iweala, others shine at IWD summit
31 Mar 2021
It was a day of honour, recognition and rewarding excellence for Nigerian women especially women in public service, as the flagship publication, The Guardian honoured almost 40 women over the weekend as part of activities to mark...

Opinion
25 university council members without a woman
14 Apr 2021
It is quite incredible that the Buhari administration that has been preaching gospel of inclusiveness reconstituted the Governing Councils of five federal universities namely university of Ibadan...

Education
WIMBIZ, others fault composition of newly constituted governing councils of federal varsities
15 Apr 2021
Criticisms have continued to trail the reconstitution of Governing Councils of five federal universities by the Federal Government as women groups and eminent scholars demanded reconstitution of fresh teams.

Personality
Adebola Ataiyero-Adefila: ‘It’s important for women to know their worth and claim it’
24 Apr 2021
Adebola Ataiyero-Adefila has been an entrepreneur for over 19 years, 13 of which have been in the manufacturing sector. The COO of Banrut Rolls Nigeria, her expertise cuts across business development, marketing and operations.

WIMBIZ
First female owned, staffed swim school gets funding boost
12 Jun 2021
Nigeria’s first female owned and staffed swimming school, designed to safely train and equip Nigerian women and children in the sport of swimming, has secured funding to build a first of its kind Aquatic Center in Lagos. This would be used to build the first of its kind aquatic center with a state-of-the-art standard pool,…